Well, we have local climate change critics charging our NIWA scientists with fraudulent manipulation of temperature data. They question the scientists’ presentation of the temperature changes over time in New Zealand. They even demand the right to scrutinise minute details of this science.

So let’s be fair and demand the same transparency from these critics. I have asked them some specific questions and the answers I got show it is the critics’ “science” which is faulty. Some might even say fraudulent. The critics’ analysis of New Zealand temperature data was unscientific. And their “research paper” criticising NIWA scientists was not even checked by a scientifically competent reviewer who would have picked up their mistakes.

“Are we feeling warmer yet?“ was prepared by the NZ Climate Science Coalition and the NZ Climate Conversation group. It describes itself as a “paper” resulting from “a combined research project” undertaken by the two groups.

It was distributed as a press release by local conspiracy theorist Ian Wishart. And resulted in newspaper and blog articles claiming fraudulent activity by our NIWA scientists. Some overseas headlines include:

And a few local blogs cooperated in the slander with articles such as:

Maybe these climate critics will claim they are not responsible for the tone of these newspaper and blog headlines and content? You be the judge!

The “paper” claims that scientists “created a warming effect where none existed.” That “the shocking truth is that the oldest readings were cranked way down and later readings artificially lifted to give a false impression of warming.” And “we have discovered that the warming in New Zealand over the past 156 years was indeed man-made, but it had nothing to do with emission of CO2 – it was created by man-made adjustments of the temperature. It’s a disgrace.

Strong claims indeed. And damaging, even slanderous, ones.

The unnamed authors of this “research paper” acknowledge that the climate scientists had adjusted, or corrected, the raw data – but pretend to be ignorant of the reasons for this. Even claiming (wrongly as it turned out) that NIWA would not explain the adjustments. Hard to believe because they do refer to the problem of combining data from different meteorological stations and sites – if only to claim adjustments for site effects are not necessary. They declared “the station histories are unremarkable. There are no reasons for any large corrections.” (My emphasis).

So clear accusations are made. They attack the integrity of our local scientists. They claim the NIWA graph is fraudulent, readings have “been cranked way down” or “artificially lifted to give a false impression.”

Questions for the critics

Richard Treadgold (convener of the Climate Conversation group) collated the “research paper” and kindly answered my questions on the scientific analysis used and the degree of scientific checking of the “paper.” I am thankful to Richard for his rapid and helpful replies.

3 and 4: Answers were a bit evasive but included “But our qualifications are not relevant to our study or the questions arising from it, because scientific expertise was neither claimed nor required.” He described their “paper” as “an informal study.” And “we would observe that our study did not need any normal scientific checking . . .  Certainly the lack of scientific checking does not invalidate any of the statements we make.”

What a shocking admission

How can one combine data in the way they did without first checking if this was valid? Even worse – they made a bald assertion that there were no sign of site effects – without checking. Without any evidence. 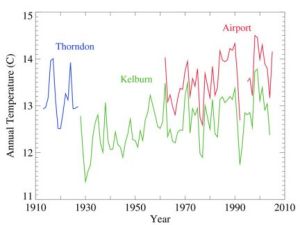 This is a dreadful mistake, even though the research was not done by scientifically competent people. A simple statistical analysis would have revealed any site effects and therefore the necessity of correcting the raw data when they were combined.

Even simpler – site effects would have been revealed by simple plots of the data from different stations. This is demonstrated by the data for the three Wellington stations in the figure.

Their “research” distorted the temperature data, did not include even the most rudimentary analysis of the data for site effects, and the “research paper” had no competent scientific input or review. And the “paper” then goes on to attack the integrity of respected NZ scientists , virtually accusing them of scientific fraud!

The lack of review or scientific checking is also shocking.

After all, they are making accusations against scientists whose output is routinely reviewed. How can the critics claim any credibility if they are not prepared to expose their claims to the same level of checking?

Finally, the critics use a couple of street-fighting tactics:

They avoid any discussion of their own scientific failures by continuing to attack NIWA’s work. Their attacks are usually of the “when are you going to stop beating your wife” type.

They continually charge NIWA with not making data available, or not describing methodology. They paint a picture of defensive and evasive researchers.  And any response from NIWA is met with new demands. The goal posts are always on the move.

Their demand for justification of data adjustments moves on to demands for detailed methodology used in the adjustments. Then questions about the number of stations included. Now on to questions about urban warming effects. And so on (haven’t yet checked todays new demand).

They aren’t interested in the answers of course – after all they could get these from publicly available data and published papers and reports.

They just want to create an impression that NIWA is guilty of fraud, and is being evasive and deceptive.

Really the spotlight should be directed at these crticis;

Why produce a “research paper” without any scientific input?

Why do they believe scientific expertise was “not required” for this project?

Why did they not submit their “research paper” to any scientific review process? and

Why did they release their “paper” as a press release via a well know conspiracy theorist? 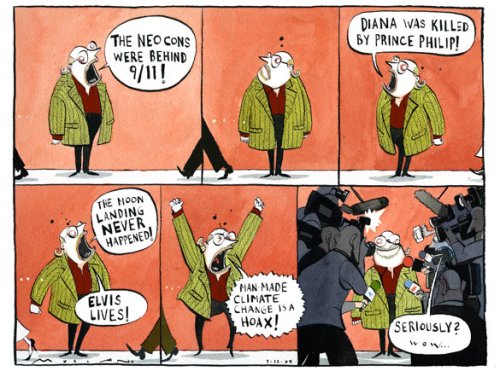