Climate science for you and me 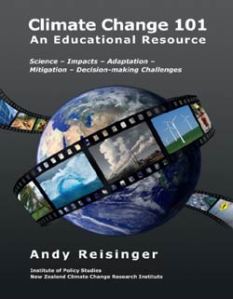 This book is a much-needed authoritative introduction to the UN International Panel on Climate Change (IPCC) reports. It is readily accessible by the interested lay person, as well as by students and professionals. Those interested enough to take part in public discussion around this issue will appreciate the book.

Independently of the whole “climategate” hysteria there have been calls within the science community for reconsideration of the role and operation of the International panel on Climate Change. There is concern that its reports need to be more frequent and less conservative. I hope such a consideration also pays attention to ways of communicating findings to the public. The recent announcement of a review of the IPCC’s work provides an opportunity for this.

The IPCC was formed to provide the best scientific information possible to governments. Governments, not their citizens. So the basic reports are extensive (three volumes totalling about 3000 pages). And most policy makers rely on the Synthesis Report (103 pages), referring to the basic volumes only to check details when necessary.

The whole process and findings of the IPCC are transparent. Anyone can read the reports on-line, or download pdf copies, or refer to the primary publications reviewed. But who bothers? We are just bombarded with (and possibly confused by) too much information and detail.

Andy Reisinger is the first author to make the IPCC reports themselves move accessible, at least locally if not internationally. Sure, there are many books discussing the science of climate change but this is authoritative because if is based mainly on the IPCCs 4th assessment report. It makes frequent references to the appropriate sections of these reports. The book also includes information from the scientific literature that has appeared since then (2007). This helps to bring the findings up to date.

The author has close experience with the work of the IPCC. From 2006 to 2008 he managed production of the Fourth Assessment Synthesis Report. Currently he is a senior research fellow with the NZ Climate Change Research Institute at Victoria University of Wellington.

The book starts with simple explanation of climate, climate science terms and popular fallacies. Mantra like “cooling since 1998” and “urban heat islands.”

The rest of the book is divided into the same subject areas as the IPCC reports – “The Physical Science Basis“ (Working Group 1 – WG1), “Impacts, Adaptation and Vulnerability” (WG2) and “Mitigation of Climate Change“ (WG3). This division probably means that readers will concentrate mainly on the section they are most interested in. The background science of climate change is presented first. Then the social science relating to humanity’s vulnerabilities and ability to adapt to climate change. And the economic, political and social policies involved in adaption and or mitigation measures. I can see the book being used by students and professionals in a range of specialities.

I naturally gravitated towards the physical science chapters. However, I did enjoy reading the sections more related to economic, social and political aspects. These gave me an appreciation of those other areas of research that I do not normally encounter, and their importance.

“Settled science” – not so

The overwhelming impression for the reader is that our current assessment of climate change is far from extreme – either in presentation or in possibilities.

The style of presentation is balanced and conservative. This will come as a surprise to anyone influenced by political charges of extremism. Those used to terms like “alarmist,” “warmist,” etc. Information is discussed in terms of probabilities, often statistically calculated. The inherent uncertainties of computer modeling are clearly expressed. Areas of ignorance are stressed. Nothing is hidden or over-claimed. I often came across the term “poorly understood” – and appreciated the honesty.

This reflects the objective style of the IPCC reports themselves. Far from the “settled science” mantra used by denier groups to discredit climate science.

There are of course some minor faults. More use of colour in the figures would have helped their interpretation – shades of grey are not always clear. Fig 1.4 displays sea levels but the caption refers to temperature.

The major fault is a lack of index. I find this surprising for a book with technical content, one that students, professionals and interested lay persons will use. All readers who wish to use this book for reference purposes will lament the omission.

I hope the publishers have received plenty of feedback on this fault and correct it for the next printing. Perhaps they could also consider inclusion of a glossary.

I have mentioned the overall impression of objectivity, conservatism, honesty and lack of exaggeration. Another message I got was one of hope. We are so used to hearing the doomsday predictions. However, the book discusses projections based on different economic and social scenarios. Some of these are not alarming, nor expensive. At the lower levels of mitigation some projections even showed economic benefits, rather than costs. This is the positive, but often ignored, side of climate change. Personally I think the future technological changes which help us to adapt and to mitigate greenhouse gas emissions are going to bring enormous benefits to humanity. Provided we don’t kill off science and rationality as some of the extremists in the denier groups appear to want.

Discussing the political, social and economic issues also brought hope to me the importance of social and political freedoms, as well as promoting science and rationality. Clearly those societies which are most backward socially and politically will be in the worst position to adapt to climate change. They will be most affected by population pressures, ignorance and autocratic social, religious and political structures.

On the other hand those societies which are freer, where women are liberated and have access to education and reproductive health facilities and knowledge, and which accept the importance of science and technology, are in a better position to adapt.

I like that the book stresses that science can only inform. And it makes clear that useful information is coming from social and economic sources as well as the physical sciences. But when it comes to policies and politics ethical questions outside the province of science arise. Questions like what responsibility we have for any mess we may be leaving our grandchildren? What responsibility developed nations have for the plight of developing nations? What responsibility we as New Zealanders (who will only be slightly affected by climate change), have for negotiating policies aimed at solving the global problem?

The last Chapter, “Global response and Challenges for the Future” deals with these issues. With the nature and structure of the international negotiations we hear so much about. These negotiations must appear confusing to the lay person. I have even heard the Copenhagen Conference described as an IPCC conference! Quite wrong.

So this is a useful chapter dealing with the history and structure of international negotiations on this issue. The role of the World Climate Conferences, the World Meteorological Organisation, The UN Environment Programme and the International Council of scientific Unions. It describes how the UN General assembly established the IPCC and described its tasks.

The chapter draws a clear distinction between the science role of the IPCC and the political role of these international negotiations and conferences within the UN Framework Convention on Climate Change (UNFCCC). Perhaps if more people understood this the IPCC might be less of a target for those with political bitches.

In a rare departure from cold objectivity, and fitting right at the end of the book, Reisinger warns about the results of doing nothing. He says:

“I often think about having to stand up at some stage, several decades from now, and answer the questions:

‘What did you do when you became aware of the problem?’

‘Do you think you did the right thing, personally, given what was known even then about climate change?’

I do not think that saying it was a problem of others will sound terribly convincing to anybody.”

So a useful book. One that will be essential for students and professionals working or studying in this area. But also one the interested lay person will appreciate and use.

If only there was an index.

One response to “Climate science for you and me”