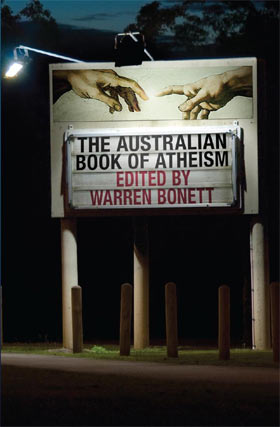 This is a book by Aussies, for Aussies. But given our similar histories and cultures there is a lot here for Kiwis as well.

It’s a collection of short articles by 33 Australians. They cover personal recollections and reflections. National history, education, social and cultural areas. Politics, philosophy and science. There is even a section on “Religion and the Brain.”

As is the nature of such collections most readers will find something of interest. And different readers will inevitably have different favourites. My review reflects my own interests.

Why an Australian Book on Atheism?

And why now?  Aussies, like Kiwis, are easy going. We don’t easily get our knickers in a twist – especially about religion. We feel our societies are secular. And why not “live and let live?”

The editor, Warren Bonett tells us why in his article “Why a Book on Atheist Thought in Australia?” And his reply is relevant to us as well. Despite our illusions, Bonett argues, religion is embedded in the political systems of our countries.  It has “an automatic and largely unquestioned place in the public forum.”

Australian paid over $150 million for “Catholic World Youth Day.” And $1.5 million to help celebrate the canonisation of Mary MacKillop.  Society places faith-based groups in charge of social services. Religious spokespeople appear to have unlimited access to politicians. And any criticism of religion provokes a response which “sounds like aggression.” How often have we heard such criticism, or indeed those making the criticism, described as “aggressive, strident, and intolerant?” Even “fundamentalist.” There is an unspoken rule “You can’t criticise ideas of they are religious beliefs.”

And the privileges! Not least of which is the subsidy* we pay for with tax exemption purely based on supernatural belief.  Religion also gets almost automatic, and unwarranted, recognition for authority on morality and ethics, education, human rights, healthcare and social services. Rarely are spokespeople for the non-religious consulted.

Warren ably argues the case for the book. And, despite our illusions, he is not wrong.

Many readers will welcome the inclusion of the words for Tim Minchen’s poem/song Storm. This is a real modern classic and I appreciate having the words easily accessible in a book I own. It’s something I am sure I will come back to often. To relive the performance.

Chrys Stevenson begins the book with a history of atheism in Australia (Felons, Ratbags, Commies, and Left-wing Loonies.) It is fascinating. One day I hope someone produces a similar history for New Zealand.

Peter Ellerton’s article “Theology is Not Philosophy” attracted me. It is fashionable today for theologians to hide behind the label Philsophy. To use the word as if there is only one version of philosophy and it is the one they peddle. To try to give respectability to their dogma and pronouncements by labelling them “philosophy.”

Ellerton, who teaches secondary school philosophy critiques theology by showing that, in contrast to real philosophy, theology does not encourage critical thinking and reasoning skill in pupils. As he says: “theology promotes an acceptance of avoiding, minimising, or otherwise refashioning philosophical analysis, inductive reasoning, and deductive logic, while dishonestly brandishing them as the legitimate tools of its trade.” It is “difficult to avoid circular reasoning within a teleological framework.” And “it is this inescapable aspect that neatly cleaves off theology from the rest of philosophy.”

I am pleased to see several articles confronting the issues of ethics, morality, meaning and spirituality. Areas where religion claims special skills and tries to deny to unbelievers. Dr Robin Craig’s article “Good without God” develops an argument for secular ethics. It rejects the religious monopoly and argues that secular morality does not conflict with the old “is-ought” problem which by critics of secular ethics often trot out

Professor Peter Woolcock argues for meaning and purpose in the lives of non-believers in his article “Atheism and the Meaning of Life.” And the President of the Rationalist Society of Australia, Ian Robinson, talks about spirituality in “Atheism as a Spiritual Path.” This pleased me as I think spirituality is a word we sometimes avoid because one of its meanings relates to supernatural ideas. In doing so I think we often enable our critics to extend the meaning and argue that we cannot appreciate the higher things in life, art, music, culture and even nature.

Another section that interested me was that on “Religion and the Brian.” This includes two articles “The Neurobiology of Religious Experience” by Dr Adam Hamlin, and “Neuroscience, Religious Experience, and Sensory Deception” by Dr Rosemary Lyndall Wemm. Necessarily brief these give a taste for some of the current research literature in this field.

Last March I attended the Global Atheist Convention in Melbourne. So I recognise some of the authors in this collection who also spoke at that convention. Sometimes their articles summarise those talks. Both that convention, and this book, has helped me understand the huge depth of atheist thinking in Australia. In this collection the authors have widely diverse backgrounds. There are historians, politicians, writers, lawyers, broadcasters, social workers, doctors, musicians, comedians, teachers, engineers, philosophers, scientists, bloggers, social scientists, anthropologists and psychologists. And then there are a few who hold positions in Australian atheist, humanist and sceptics organisations.

Warren Bonett, the editor, seems ideally placed as editor. He owns a bookshop, Embiggen Books, on Queensland’s Sunshine Coast, which specialises in scientific and sceptical books. This generalist approach must explain his ability to contact such a wide and representative sample of authors.

I recommend this book to anyone at all interested in atheism down under. Even if your interest is limited to a narrow aspect like law, philosophy or education, rather than the movement as a whole. You will find something of interest and relevance here.

*A useful appendix in this book (“The Cost of Advancing Religion”) includes a table itemising the “Cost of Religious Exemptions and Subsidies to Taxpayers.” The estimated total for Australia is $31.1 billion!

See also: Warren Bonett – Down Under Reason. A point of inquiry interview where Bonett discusses this book.