Ibn al-Haytham - a pioneer of the scientific method

This theological myth seems to surface in any debate about the relationship between religion and science. It is the claim that Christianity gave birth to science. That modern science was not possible anywhere but in the European Christian culture.

The myth is actively promoted by some Christian scholars – theologians and philosophers of religion. And sometimes it even appears that less critical non-religious philosophers who are largely ignorant of the history of science accept the myth.

Perhaps we should expect a bit of Christian chauvinism. After all, nationalists claim all sorts of things originated in their own country (People of my generation may remember when the Russians were claiming all sorts of technologies were invented by their countrymen – I fondly remember their claim for lampposts!). And Christian chauvinism is alive and well in areas like human rights and morality.

But this myth is offensive. It’s insulting to medieval Islam. To the scientists and philosophers of the Roman Empire and classical Greece. To the civilisations of ancient Egypt, Babylonia, China and India and beyond. 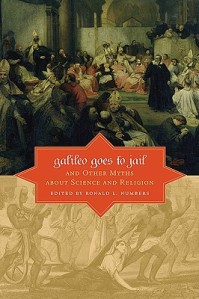 There is a useful chapter on this myth in a book recently edited by Ronald Numbers – “Galileo Goes to Jail and Other Myths about Science and Religion.” It’s “Myth 9: That Christianity gave birth to modern science” written by Noah J. Efron. He is President of the Society for Israeli History and Philosophy of Science.

No one denies that many scientists were, and are, Christian – or that Christian philosophers were involved in developing ideas about nature. But there is simply far more to the story of modern science than that. Efron points out that “the imprint of Greek and Roman ideas on Christian intellectuals remained vivid; they provided the starting point for nearly all inquiries into nature until the start of the modern era. For many centuries, Aristotle’s philosophy was knit most tightly into the woof and warp of Christian theology.”

And “excluding the place of classical philosophers from an account of the history of modern science is an act of intellectual appropriation of breathtaking arrogance. . . .Christian astronomers (and other students of nature) owe a great debt to their Greek forebears.”

Christian philosophers also took from Muslim. “It was in Muslim lands that natural philosophy received the most careful and creative attention from the seventh to the twelfth centuries. . . .By virtue of its geography alone, Islam became “the meeting point for Greek, Egyptian, Indian and Persian traditions of thought, as well as the technology of China.” This was an asset of incalculable value.”

Muslim scholars translated “great numbers of Greek, Indian, and Persian books of philosophy and natural philosophy into Arabic.” Muslim scholars added to the original texts and wrote original material “that advanced every major field of inquiry. . .They developed intricate instruments of observation.” These translations and new work were of immense worth. They were later translated into Latin and became available to Christian scholars.

Scientists are used to proper attribution. To acknowledging that we all stand on the shoulders of giants – and it’s a bit like “turtles all the way down.”  Efron writes: “Modern science rests (somewhat, anyway) on early modern, renaissance, and medieval philosophies of nature, and these rested (somewhat, anyway) on Arabic natural philosophy, which rested (somewhat, anyway) on Greek, Egyptian, Indian, Persian, and Chinese texts, and these rested, in turn, on the wisdom generated by other, still earlier cultures. .  .  . “This has been called ‘the dialogue of civilisations in the birth of modern science’ [by Arun Bala in his book The Dialogue of Civilizations in the Birth of Modern Science

Even going no further than Europe at the time of the scientific revolution we can see other sources of modern science besides, or as well as, religious scholarship. Commerce and trade: “the values inherent in the world of commerce were explicitly and self-consciously recognised to be at the root of the new science by contemporaries.” The early-modern voyages of discovery also contributed. There were invention and importation of important technologies (eg. clocks, printing press) which boosted inquiry. “Europe’s legal systems influenced the development of both scientific theory and practice.” And: “Early modern Europe also saw the emergence of other secular institutions that came to play an important role in the growth of modern science. Scientific societies, for example, were established across the continent beginning in the seventeenth century.”

This history and the current situation where a large percentage of scientists are not Christian, many not even religious, show an important fact about modern science. “The rich diversity of the cultural and intellectual soil deep into which its roots extend.” And: “With the passage of time, the ethos of science came to stand at odds with the particularist claims of any religion or ethnic group.” Science is a non-sectarian, democratic and inclusive enterprise.

The chauvinistic approach of the myth that Christianity gave birth to science opposes this scientific ethos. It is denigrating to non-Christians and immature. As Efron points out assigning credit is not a zero-sum game. “It does not diminish Christianity to recognise that non-Christians, too, have a proud place in the history of science.”

Efron concludes his chapter with: “For better or worse, science is a human endeavour, and it always has been.”

66 responses to “Christianity gave birth to science – a myth?”