This book describes Andrew Kessler’s experience when he left home and went to live on Mars. Well – almost. As he describes it:

“I spent three months in mission control with 130 top NASA scientists and engineers as they explored, photographed and dug up Mars. I was the first outsider ever granted unfettered access to the physicists, biologists, chemists, geologists and rocket scientists in the control room of a planetary mission to Mars. . . . For 90 days, I sat with the crew of the Phoenix mission working to explore the Martian arctic.  Martian Summer is my non-fiction account of the strange life inside mission control and the people behind digging for dirt on Mars.”

This was possible because of an initiative by Peter Smith, Head of the Phoenix Mission. He organised to bring Kessler on to the team to provide some of the science outreach. Kessler had co-produced Mars: The Quest for Life, a Discovery Channel documentary about the mission. He was now “embedded” into the team at the University Of Arizona in Tucson for the 90 days of the early Phoenix programme “Martian Summer” is the result. 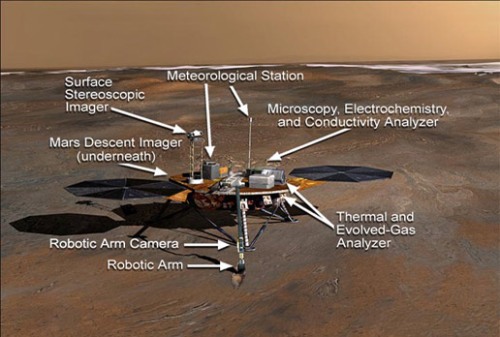 So the book is about the scientists and engineers in the team handling the Phoenix Mars Lander which landed on Mars May 25, 2008. It’s about the people actively involved in today’s exploration of Mars, and their work. Given the problems and cost of manned space exploration by interplanetary and planetary robots is currently the only game in town. The vehicles, and the teams running them, comprises modern interplanetary discovery.

“Martian Summer” is a non-fictional, almost historical, account. But it has its fair share of excitement, frustration, stress, personality conflict, bureaucratic problems, financial problems debate and scientific discovery. Anyone who has worked in a scientific research programme will recognise the general problems.

I have worked in a scientific institute so know they can provide plenty of human interest stories. With strong characters, human frailties, comedy, sex, scandal and murder – as well as science. Personally I think they could be the basis of good TV soap operas.

But interplanetary research using robots has its own unique set of difficulties. And the Phoenix Lander compounded these with its own set of problems.

Depending on where it is in its orbit Mars is between 75 and 375 km from the earth. Obviously that meant a 10-month delay between the launch and Mars landing. But it also meant that communication with the Lander involved at least a 15-minute delay (or a “round trip” of 30 min) – just because of the speed of light. On top of that communication relied on relay by the Mars Orbiter, a satellite in orbit around Mars. So communicating with, and controlling Phoenix, was a complicated and long-winded affair.

The small memory (100 MB of flash memory) aboard Phoenix for storing new commands and collected data was another limit. Memory was expensive when the Lander was designed. Phoenix was basically the spacecraft built for the Mars Surveyor Program 2001 Lander. It contained scientific instruments from the Mars Polar Lander. Both those missions were unsuccessful and the name Phoenix was chosen because the mission was created from the embers of earlier Mars endeavours.

There was a large risk of losing data and power availability depended on sunlight producing another important limit. Temperature needs of the instruments on-board Phoenix limited operations to the Martian daytime and they required a power-consuming warming period before data collection.

As if that wasn’t enough there is a misfit between the Martian day (called a sol) and the earth day – 24 hours and 40 minutes compared with 24 hours. Doesn’t seem much but it meant the team had to work according to the Martian sol. So each individual was living a Martian sol instead of an earth day. They came to work at strange times, had blacked out windows in their workplaces to avoid confusion, ate, slept and celebrated at strange times, etc. The mismatch between the earth day and Martian sol meant they worked in a continuously changing time zone (and suffered long-term “jet lag”) over a 40-day cycle. They effectively lost one earth day every 40 days.

And the unusual time shift can be a source of psychological and health problems. A Counter Fatigue Group of psychologists and physicians monitored and studied the teams. Partly to help, partly for research. And one result was the common presence of bottles of urine being passed on to monitors.

The whole management of the Phoenix Lander was complicated enough without progressively shifting times zones and permanent jet lag.  One team handled the upload of new commands and work plans for the Lander. Another handled the download of collected data. Both these had to fit in with the Mars Orbiter and the sol/night cycle at the Lander. Then there was the work of coding new commands. This also involved working with the sister Lander in the sand pit at Tucson – an on-site construction modelling the Mar’s landing site for testing each planned action. And that itself had problems because of the different gravity on Mars.

Then there was the science. Decisions were needed about where to collect samples using the robotic arm, and what instrument to deliver them to. And depending on results (and bureaucratic demands) plans had to be changed and new code written. Often under the pressure of deadlines.

Many readers will be familiar with the new discoveries made by the Phoenix Mars Lander. The discovery of solid ice below the soil surface. The unusual presence of perchlorate in the soil. Soil nutrients. Observation of snow and clouds. Liquid water on the Lander legs. The unusual flow properties of the soil. And so on.

These discoveries were the outcomes of the mission approach – to look for water and evidence of its past presence. Mission leader Peter smith has reported some of these findings in a scientific paper (Smith, Peter. “H2O at the Phoenix Landing Site.” Science. 3 July 2009: Vol. 325, no. 5936, pp. 58-61).

Kessler also outlines many problems the team had to confront. Electrical shorts on the Lander deck interfering with operation of some of the instruments. Jamming of the doors on the TEGA – the Thermal Evolved Gas Analysers (apparently because of inaccurate machining of parts replaced just before launch). Early inability of sample transfer from the scoop into the ovens. A bureaucratic demand from NASA to get a sample of ice rather than rely on observations which effectively lost 23 sols of sampling time. Automatic “safing” of instruments – defaulting into “safe” mode when actions went outside preset parameters or unforeseen obstacles were met. And so on.

Each problem meant long hours of rewriting code, replanning work and testing on the sister Lander in the sand pit at Tucson, and transmission of new work plans.

I guess all this is the reality of today’s planetary exploration. Hands-on exploration – but hands-on from a distance in time as well as space.

One bitch I have as someone who has researched soil chemistry – why call it “dirt?” The NZ Soil Science society had an important motto – “Never treat soil like dirt.” So it surprised me to hear scientists on the Phoenix team at the time talking about “dirt” samples. The book used “soil” fewer times than “dirt.” Sure, technically the term for Mars is “regolith.” But why use “dirt?”

And the bloody acronyms the US Space programme loves. Kessler refers to an “acronym dictionary.”  He says “Yes it exists. And I love it.” Seemingly he found it necessary in getting to grips with some of the regular talks given by team members (he described one as a “nonsensical list of acronyms”). I just wish he had provided this dictionary in the book. Acronyms may be OK for people working together everyday on the same problems and instruments – but not for most readers. At times I was unsure which instrument he was referring to, or which team was presenting information. Perhaps he could have used the full terms more often.

Testing was done at the PIT (Payload Interoperability Testbed). Non-US Team members had restricted access to some information because of ITAR (International Traffic in Arms Regulation). And EOS was the End of Sol!

Mind you, I thought naming samples and sample sites was endearing. Refreshing to see reference to the “Rosey Red” and “Baby Bear” samples!

I enjoy realistic stories about science and much prefer them to the common fantasy sciFi. So I welcomed the chance to review this book.

I found the writing a little over-enthusiastic in parts – especially at the beginning. But once Kessler got into the details of the science, the problems and the discoveries, the account was absorbing.

Just as you would expect in a good soap opera.

If you like science stories and realistic science fiction you will enjoy this book. Especially if interplanetary exploration appeals.

One response to “Working on Mars”