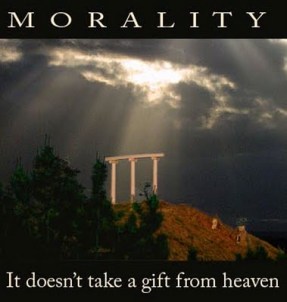 If you have ever searched the internet for a section of text from Darwin’s writings you will have noticed that most of the links that come up are to creationist websites and blogs. What we are seeing is simple dishonest quote mining. Somebody makes a claim about evolution, Darwin or Darwinism, attaches a mined quote – and the quote then has a life of its own. It gets repeated ad nauseum by the creationist echo chamber – with hardly any of the users bothering to check the quote against the original for accuracy – let alone context.

Here’s one taken from Darwin’s The Descent of Man

.  It’s from Chapter IV: Comparison of the mental powers of man and the lower animals. In this Darwin discusses the evolution of a moral sense, sociability, social instincts and virtues, rules of conduct and religious beliefs. After arguing against the idea that a different social animal “if its intellectual faculties were to become as active and as highly developed as in man, would acquire exactly the same moral sense as ours” Darwin wrote:

“If, for instance, to take an extreme case, men were reared under precisely the same conditions as hive-bees, there can hardly be a doubt that our unmarried females would, like the worker-bees, think it a sacred duty to kill their brothers, and mothers would strive to kill their fertile daughters; and no one would think of interfering.” (Bold added)

Recently I have seen the quote reproduced by numerous religious apologists and creationists arguing against “secular morality.” (Almost always the section in bold is omitted – usually evidence that users are just copying and pasting from other apologist posts or articles). And they interpret this to mean that a moral and social code held by a human species that has evolved must be the same as the most basic of animals or insects.

See, for example Flannagan’s When Scientists Make Bad Ethicists and Weikhart’s Can Darwinists Condemn Hitler and Remain Consistent with Their Darwinism?  Flannagan asserts:

“it is unlikely that a loving and just person could command actions such as infanticide or rape whereas, evolution, guided only by the impersonal forces of nature, is not subject to such constraints.”

Weikart has made a reputation of ascribing the morality of Nazism to Darwin (he is the author of From Darwin to Hitler: Evolutionary Ethics, Eugenics, and Racism in Germany

and Hitler’s Ethic: The Nazi Pursuit of Evolutionary Progress

“if morality is the product of these mindless evolutionary processes, as Darwin and many other prominent Darwinists maintain, then “I don’t think [they] have any grounds to criticize Hitler.””

“To natural selection killing your siblings and offspring is all the same as loving them. Selection only favors what works to enhance survival and reproduction, and it does not matter if it is nice and moral, or harsh and brutal.”

The dishonest bait and switch should be obvious to someone who is not ideologically confused.  Evolutionary science indicates that human social and moral senses have arisen from evolution of our species and our brain. This means we have been able to develop social arrangements and moral codes. Those will be strongly influenced by our evolved instincts, emotions and social interactions. The process of natural selection is “mindless’, “unguided”, etc. but that does not mean that our human moral and social arrangements are heartless, mindless, emotionless and brutal in the way that Flannagan and Weikart, and their creationist friends, claim.

And these religious apologists would have known that if they had honestly looked at the context of their quote rather than blindly (mindlessly) copying and pasting from other creationist sources.  For example, in the next chapter of The Descent of Man Darwin wrote:

“the enforcement of public opinion depends on our appreciation of the approbation and disapprobation of others; and this appreciation is founded on our sympathy which it can hardly be doubted was originally developed through natural selection as one of the most important elements of the social instincts.”

Natural selection may be mindless but the results certainly aren’t – although the quote mining by these apologists seems pretty mindless to me. As does their attribution of brutal, thoughtless and immoral interactions to a species which has evolved to possess advanced social and moral intuitions.

This crude misrepresentation of an evolutionary understanding of how human moral and social instincts arose is a blatant form of strawmannery – one actively promoted by conservative religious apologists and creationists.

An evolutionary explanation for the origin of our species, as well as the origin of our moral and social sentiments, does not conflict in any way with the fact that humans can, and most do, adhere to the most humane moral codes.

This makes Flannagan’s support for religious command ethics (“divine commands”) over a scientific understanding of human ethics ridiculous. The “loving and just person” he refers to in the above quote is his god. Now, he claims that god is “unlikely” to “command actions such as infanticide or rape.”  Yet he supports and defends William Lane Craig‘s theological justification for biblical genocide/ethnic cleansing (see Concern over William Lane Craig’s justification of biblical genocide). And, yes, Craig’s justification did include infanticide:

“I would say that God has the right to give and take life as he sees fit. Children die all the time! If you believe in the salvation, as I do, of children, who die, what that meant is that the death of these children meant their salvation. People look at this [genocide] and think life ends at the grave but in fact this was the salvation of these children, who were far better dead…than being raised in this Canaanite culture. “

What right do these religious apologists and creationists have to defame the humane moral codes held by most of our species just because the facts show we, and our instincts, are a result of natural selection?

Surely it’s their “divine command” ethics which are being used to justify the most brutal inhuman, in fact anti-human, actions.