Climate change is a pressing issue – and one which attracts a lot of politically inspired misinformation. Hansen’s book provides a lot of the science, but also the history of the science.. 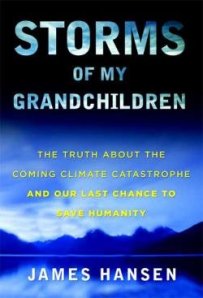 Book Review: Storms of My Grandchildren: The Truth About the Coming Climate Catastrophe and Our Last Chance to Save Humanity

Climate change contrarians and deniers love to hate James Hansen. He’s up there alongside Al Gore, Michael Mann and Phil Jones. And of course their hatred is no more justified in Hansen’s case than it is for the others.

Others criticise Hansen for his “activism.” His willingness to warn politicians and the population in general of the dangers we face if we continue with a “business as usual” approach to fossil fuel and CO2 emissions. They suggest this could discredit his science. Scientists must always be objective and should limit their pronouncements to the scientific facts alone.

This is not an old problem for scientists – remember their activism after the first use of nuclear weapons and the beginning of the nuclear arms race. Scientists often confront ethical issues arising out of their work.

This book does reflect these two features of Hansen’s contribution, though. The scientific and the “activism.” This helps enliven the story. Rather than just presenting the dry scientific facts, the information is woven into a narrative.

Starting with Hansen’s appearance before a Vice-Presidential Climate Task Force in 2001 we get to learn about other appearances. Both before political committees and publicly at conferences and in the media. We hear of Hansen’s doubts and self-criticism of his effectiveness in these situations. He covers the arguments used by his detractors such as Richard Lindzen, and their style of presentation. We also get to learn about the political attempts to silence him. Manoeuvres by the White House to censor reports and prevent communicatiing the science of climate change. (“NASA press releases related to global warming were sent to the White House, where they were edited to appear less serious or discarded entirely”). The role of the Public Affairs office of NASA in this which even went so far as altering a mission statement on the NASA website. (The first line “to understand and protect our home planet” was removed in 2006 after Hansen used it to support his actions).

But even the science has a narrative about it. We learn about the areas where knowledge is lacking, recent new discoveries, and so on.

Hansen’s comments on the science

I liked his willingness to provide opinions on the science. For example he turns out to be hard on models, despite using them. He makes clear that they have limitations as well as specific capabilities and their sensible use should always keep these in mind. Hansen suggests that evidence for anthropogenic climate change and mechanisms of global warming has come most usefully from palaeoclimate studies, followed by ongoing modern observations and thirdly by computer models.

Hansen describes our lack of information on aerosol forcing in climate change. He had been instrumental in including aerosol measurements in the planned Climsat satellite mission . Unfortunately this was never launched and we still lack sufficient information in this area.

His analysis of the palaeoclimate evidence and the lessons we can draw from it is interesting. We see many disciplines coming together to produce evidence for different events (such as the methane release causing the Palaeocene-Ecocene thermal maximum about 55 million years ago). And the overall conclusion is the atmosphere CO2 has been the major, but no the only, driver of global temperature changes.

The fact that natural climate oscillations in the record precede changes in temperature (see figure) is an old story climate change deniers like to quote as “evidence” CO2 cannot cause global warming. This is one of the first bits of palaeoclimate evidence Hansen discusses. He describes how natural climate changes arise from, for example, perturbations in the earths orbit or tilts in the earth’s spin axis. One of the feedback effects from a temperature increase is the release of CO2 from the oceans. This then becomes a major driver for further temperature increases by the greenhouse effect.

Nowadays, humans provide new sources of CO2 emissions which can themselves initiate temperature increases. Human derived sources currently emit at a rate 10,000 times greater than the planet’s natural sources. Human made effects now dominate over the natural forcing. And this means the “global cooling trend needed to cause the slow feedbacks that would take earth into its next ice age no longer exists.” “Humans, by rapidly burning fossil fuels, have caused global warming that overwhelms the natural tendency toward the next ice age.”

Hansen has had differences with the Intergovernmental Panel on Climate Change (IPCC) reports and his criticisms have at times led to problems with officials and journal editors. Some of this relates to his warnings about the stability of the Antarctic and Greenland ice sheets and the fact this wasn’t considered in determining lower limits of greenhouse gas concentrations. I suspect that with time more scientists are coming over to Hansen’s view on this. He has also been less than glowing in his comments on the effect of international agreements like the Kyoto Treaty and the proposals considered as Copenhagen.

Hansen is clear that historically greenhouse gases have played a key role in climate changes. Usually by feedback mechanisms rather than direct initiators. However, today greenhouse gases have an initiating role. The resulting changes are rapid. And the prime cause is the release of emissions from fossil fuel. So he clearly focuses his arguments on the fossil fuel. As he expresses it, humanity must do all it can to leave these fuels in the ground. Unfortunately a “business as usual” approach will inevitably lead to their complete extraction. There is pressure to recover even the most recalcitrant fuels, fuels like shale oil, which turn out to be more polluting.

He considers improvements in energy efficiency (quite effective) and other energy sources such as clean coal (CO2 capture and storage – which he considers as not economically practical) and nuclear power. On the later he supports a return to research into new reactors which are more efficient and produce less waste.

Cap and Trade or Fee and Dividend?

Hansen argues strongly against the cap and trade approach being adopted by most countries and internationally. This goes back to his experience interacting with politicians and policy makers. As he sees it the problem is Washington. Special interests have too much power. This influence bureaucrats and inevitably policies are manicured to serve those special interests rather than the people. He thinks this is particularly true of the cap and trade approach.

In contrast Hansen argues for a Fee and Dividend approach. This involves increasing the price of fossil fuels at source, with a fee or tax. On the other side the collected revenue is returned to the whole populations. Personally he argues for a green cheque – a payment to each individual. However, others prefer the revenue is used to reduce payroll tax.

He argues this method would enable the increase of fossil fuel prices, thus encouraging decline in their use and investment in alternatives. On the other hand the green cheque would reduce the effect on the individual. They would have an interest in reducing use of fossil fuels and increasing alternatives, such as power saving. There would be a personal interest, rather than a knee-jerk opposition. And there would be less chance for gerrymandering by special interests.

Personally, I don’t have the political or economic skills to evaluate the different approaches. However, I am attracted to Hansen’s ideas and it is a pity there isn’t more public debate about these issues. Really that is where the debate should be – how to handle the problems of climate change. Instead the deniers have tended to dominate and work to discredit the science. Shooting the messenger rather than acting on the message.

This is a great book, both for the lay person and those more familiar with the science. While he does get technical at times he warns the reader and suggests they jump the section if they feel it is beyond them. This advice from an author is always useful, I find.

While being scientifically informative and sound Hansen does bring the issue down to the politics and economics of solutions. And he drives home an ethical message. Because, as the title makes clear, this book is about his grandchildren. Actually all our grandchildren. If we do nothing, allow “business as usual,” they face a bleak world. “Business as usual” will probably mean rising sea levels. This together with the storms and unstable weather systems resulting from climate change will present them with a chaotic world.

And that’s only the natural global chaos. Just image the social and political results!

One response to “Christmas gift ideas: Thinking of our grandchildren”