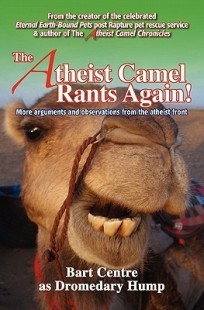 Personal passion does wonders for one’s writing. Mind you, passion is also polarising. Not everyone is going to love what you say, even though you say it forcefully and colourfully.

I am sure this is the case with Dromedary Hump’s latest book The Atheist Camel Rants Again! But that is part of what makes the book so good – for some of us at least.

The book is well named – it is a rant. But a colourful, humorous and soul-enhancing rant which will appeal to atheists and other free-thinkers. It was not meant to appeal to those who Centre satirically calls the “theologically deluded.” Nevertheless, I am sure there are some more open-minded religious people who will appreciate the humour and colour. In fact these people will probably find a lot they can identify with as they must sometimes despair at the stupidity reached by their more militant and strident co-religionists.

Like his earlier book, this one is a collection of 105 lively blog posts. They are each only about 2 pages long – which makes the book easy to dip into. You can read what you want, when you want, depending simply on what strikes your mood at the time.

In my review of his previous book (see The Atheist Camel Chronicles) I said that when Centre “calls a spade a spade” he “cleverly implies it might actually be a bloody big shovel.” Well he has lost none of that eloquence. Or humour. The satire and cynicism is just as biting.

Just as well, because there is still a lot of stupidity out there.  In “Pity the Persecuted Christians,” for example, he describes how some religious leaders:

“make it sound as though Christianity is undergoing a veritable Inquisition. . . .They cannot differentiate between their right to practice their religion (which is never implied) and the rights of non-Christians NOT to have Christian religion forced upon them . .  which is precisely what they are protesting. By impeding their holy charge to proselytize, convert, harass, badger, and impose their beliefs on others, it is they who are being persecuted. That’s about as bizarre a reversal of logic as one could conceive.”

Right on! Someone has to say it. People are fed up with the arrogant attitude demonstrated by non-consensual imposition of religious “values”, traditions and ceremonies. Centre colourfully describes this in “The Invocation:”

“the sky pilot couldn’t care less if it irks some because he sees it as his divinely directed duty to shove his God down people’s throats, welcome or not.”

In “Religion is a ‘Beautiful Thing,'” he asks:

“is it because religious charity is a way to proselytise to those desperately in need of material aid in an effort to gain converts? Is that the ‘beauty of religion’?”

Again, who else has wondered that?

And on a topical issue of marriage equality (“Those Damn Homos are Changing Word Definitions! Stop Them NOW!”) he tells opponents that “you’ll get used to gay marriage:”

“in five to ten years, gay marriage will be legal in a majority of states. And in three hundred to five hundred years, the Christian churches will apologise for their homophobic hysteria. It just takes them that long to catch up to humanity.”

And what about this depiction of a “Beffudled God” who requires a professional army of interpreters and apologists (in “Beffudled God: Good Thing he has so Many Interpreters”):

“Their God, it seems, is an articulate and confused old fool who has to rely on his creations to figure out and explain exactly what his words mean and policies should be. Liken it to a ninety-eight-year-old senile company founder who is kept locked in his office by the board of directors, and who translate his babble into whatever the board wants it to mean to the shareholders.”

But Centre doesn’t waste all his satire on the religiously inclined – some atheists also get a tongue lashing. He laments:

“a few atheists who, through their own stupidity, feed theist misconceptions of atheism. Some of them call for an ‘atheist church’ or at least see no conflict with the oxymoronic term. These atheists are the Uncle Toms, the embarrassing mentally impaired relatives of the activist atheist movement who are best confined to an attic or their parents’ basement.”

“On the other hand, if by calling every atheist organisation a church, mosque, synagogue, or coven we all get a major tax break . . .  count me in and call me ‘Reverend.'”

But, seriously, he is concerned about the knee jerk reactions of some atheists to current events:

“Perhaps my disappointment is my own fault, as I tend to credit freethinkers with using the same reasoned approach to all issues and events as when they rejected supernaturalism. More credit than we apparently deserve.”

Well, I often think we are not a rational species – even if we sometimes get some things right.

No one will be surprised to learn that Bart Centre is the creator and co-owner of the Eternal Earth-Bound Pets post-Rapture Pet rescue website (http://www.eternal-earthbound-pets.com/).

I started reading this book when I was feeling down. Before long I was laughing my head off. I had forgotten my own problems – except I was wishing I had such satirical skills.

If you are that way inclined, or even just open-minded and unafraid of satire, you will find this a book which you read through quickly. And then will start looking for his last one The Atheist Camel Chronicles.

But if you are sensitive about your beliefs (theist or non-theist) and can’t take a joke, then I recommend you avoid the book.