This book is a good read for anyone interested in ethical debates – particularly those between ethical philosopher Peter Sinclair and Christian spokespersons. Singer is usually heavily criticised for his secular ethics –  but this author provides a much more in-depth consideration of the differences – which are not as great as many Christians believe. 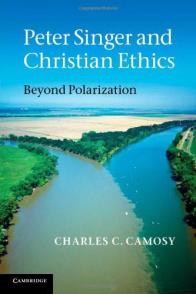 We all “do” morality – its part of being human. We will debate ethical questions till the cows come home. And we will take sides on moral issues, often reacting emotionally, even violently, to those who disagree with us.

But here’s a strange thing. Very few of us could name an ethical philosopher. Perhaps because moral questions are of such practical and personal importance ethical discussions at the philosophical level seem to not interest us.

But, those who can produce a name might, in most cases, come up with Peter Singer. This probably supports Charles Carmosy’s suggestion that “Singer is probably the world’s most influential living philosopher.”

Singer won recognition for his work on animal rights – a topical issue  today. He has written and lectured extensively on secular morality. But his reputation must also come from the publicity he gets from his philosophical opponents. Particularly philosophers of religion who have demonised some of Singers ideas, and the man himself. It’s no accident that in debates with theists Singer’s ethical ideas are the most often quoted, by theists, as negative and inhuman examples of secular ethics.

Even bad-mouthing creates recognition so these religious critics may be responsible for making Singer’s name so recognisable. That negative propaganda may not stick when people make their own efforts to read Singer.

That’s not just my judgement. Peter Singer himself recommends the book. He says:

“Philosophy makes progress through criticism that is based on a sound grasp of the position under scrutiny, acknowledging its strengths as well as seeking to expose its weaknesses. Charles Camosy does exactly that, which is why, despite the deep disagreements between us, I regard Peter Singer and Christian Ethics as a valuable contribution to philosophy in general, and to applied ethics in particular.”

The book provides a detailed consideration of the ethical positions of the Catholic Church and of Peter Singer in 5 main areas (devoting a chapter to each):

Each chapter concludes with an assessment of how close, or how different, the two positions are. For example:

Camosy has  found large areas of agreement (by the way, he does not neglect the difference between the two positions). But I really like that he goes further and suggests this agreement provides ground for cooperation, discussion and common public platforms.

Readers might be surprised at the amount of agreement Camosy finds between Singers ethical ideas and those of the Catholic Church. However, the common ethical positions found by Camosy does not surprise me. Despite claims of revelation and infallibility the Catholic Church has had to deal with real world issues for a long time. It’s natural that much of the ethical positions they arrive at will basically be secular anyway –  even if presented with religious phrases and terms.

I think Camosy’s concept of ethical objectivity residing in human flourishing and happiness reinforces this. (Although, interesting he does take that further to the flourishing of the universe as a whole). I found refreshing Camosy’s references to objective morality without the annoying evangelical habit of seeing that as “divine,” without dragging in his god.

At least, most of the time. Towards the end of the book Camosy does seem to sneak his god into the discussion, as a grounding for objective ethics. But only in the last chapter.

The “rich tradition” of Christian ethics

While Camosy’s ability to find the large extent of ethical agreement he did is heartening to me, some problems do bring me down to earth. Camosy says, and I agree, that the Catholic Church has a very rich tradition of writings and pronouncements on ethical issues.  This must have been an immense help to Camosy as he searched for some commonality. However, sometimes I felt this very richness presents a problem. Which piece of contradictory evidence does one rely on? Which particular pronouncement is considered more “official” than the others. The richness itself provides difficulties of choice, and can make a certain amount of “cherry picking” inevitable.

So I sometimes found myself contrasting Camosy’s claims with the modern public positions commonly attributed to the Catholic Church, or at least Catholic spokespersons. For example – meat-eating, vegetarianism, abortion and euthenasia. Some Catholics might not agree with Camosy’s conclusion about the extent of commonality because they don’t completely recognise the Catholic ethics Camosy describes.

Perhaps that’s the common problem of differences between church office holders and lay parishioners. But I suggest that in some cases there a more basic disagreements at the level of the office holder or “official.”

On the other hand, as an individual with an easily accessible and definitive set of writings, it is much easer to establish Singer’s “official” ethical positions.  There is less scope for “cherry picking” and one can usually find suitable quotes to show Singer’s position on various ethical questions.

A problem with philosophical labels

In their criticisms of Singer religious apologists have a common habit  of inferring an ethical position (and not find a specific quote) from their own biased understanding of ethical labels.  Perhaps I have a thing about ideological and political labels, and I am sure Singer objects to their use less than I do. He does, after all, sometimes use descriptive ethical labels in his writings. However, I think some of the more extreme interpretations of Singer’s positions does not come from specific quotes or writings of Singer. Instead they come from the description of him as a proponent of “preference utilitarianism,” for example, and then inferring a specific ethical position – often relying on the commentators own hostile or simplistic understanding of the label’s meaning.

Fortunately Camosy  relies on quotes from Singer’s writing to describe his ethical positions. Well, at least most of the time. He does slip into use of the “preference utilitarianism” label to ground an inference a few times. And they stood out to me – especially as Camosy himself is arguing towards the end of the book that Singer’s ideas are shifting. That “Singer is in the process of fundamentally rethinking his preference utilitarianism.” Even more reason to avoid labels.

I believe this book will be very useful to anyone interested in Singer’s ethical philosophy, especially comparing it with that of the Church. Camosy relies mostly on direct quotations from Singer’s writings so the book provides a useful summary of his ideas, particularly in the 5 areas mentioned. In fact, there may be more disagreements among Catholics on Camosy’s description of Catholic ethical positions. A curse of the “rich tradition” perhaps.

It should help correct some of the misunderstandings that Christians have about Singer’s ideas – if only they are open-minded enough to read books like this. I hope their approach top a book by a Catholic ethicist is more sympathetic that their approach to the original writings of Singer.

Considering the ideological differences between singer and the Catholic Church I think Camosy has done his job well. I can excuse him the few lapses that my sensitivities have identified.

And I think Camosy’s identification of the possibilities of common action between supporters of Singer and the Catholic Church is very useful. Dare I hope that the church can be open to these possibilities in the future?