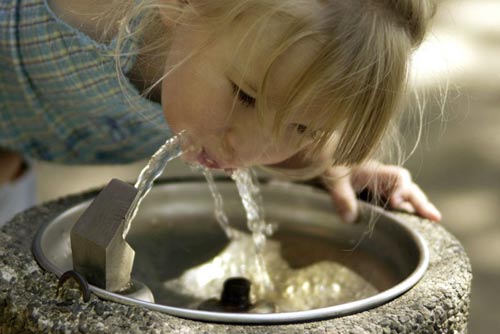 New Zealand anti-fluoride activists (and their industry backers) suffered a signficant blow with the release of a High Court Judgement on Friday. This Judgement found that all the arguments used by New Health NZ attempting to prevent fluoridation  of the water supplies in Patea and Waverly had failed.

Readers can download this 43 page judgement – I have included the Summary and Conclusions at the end of this post.

Not about the science

Commenters can easily slip into arguments this is a judgement on the scientific merits or problems of fluoridation. It isn’t.  Justice Rodney Hansen says:

[5] It is important to make it clear at the outset that this judgment is not required to pronounce on the merits of fluoridation. The issues I am required to address concern the power of a local body to fluoridate drinking water supply. That is a legal question which does not require me to canvass or express a view on the arguments for and against fluoridation.

The failed arguments put forward by New Health NZ did not relate to the science but to legal issues. Specifically they argued councils do not have the legal right to make decisions on fluoridation, or if they do this is a breach of the NZ Bill of Rights Act (NZBORA).

Justice Hansen’s judgment that councils do in fact have the right to make decisions on fluoridation is quite detailed – and well beyond my legal ability so I will not comment on it.

Medicine and the right to refuse

Justice Hansen’s  judgments on the NZBORA are clear to the layperson. Inclusion of medical treatment in the NZBORA “was a specific response to the atrocities of the Nazi concentration camps.” However:

[80] In my view, fluoridation cannot be relevantly distinguished from the addition of chlorine or any other substance for the purpose of disinfecting drinking water, a process which itself may lead to the addition of contaminants as the water standards themselves assume. Both processes involve adding a chemical compound to the water. Both are undertaken for the prevention of disease. It is not material that one works by adding something to the water while the other achieves its purpose by taking unwanted organisms out.

[81] The addition of iodine to salt, folic acid to bread and the pasteurisation of milk are, in my view, equivalent interventions made to achieve public health benefits by means which could not be achieved nearly as effectively by medicating the populace individually. . . . All are intended to improve the health of the populace. But they do not, in my view, constitute medical treatment for the purpose of s 11″ [the relevant section of the NZBORA].

Even if the “medication argument” was relevant the “right to refuse” is irrelevant for fluoridation:

“Provided it does not have consequences for public health a person has the right to make even the poorest decisions in respect of their own health. But where the state, either directly or through local government, employs public health interventions, the right is not engaged. Were it otherwise, the individual’s right to refuse would become the individual’s right to decide outcomes for others. It would give any person a right of veto over public health measures which it is not only the right but often the responsibility of local authorities to deliver.”

Appeal – the fly in the ointment?

Unfortunately, New Health NZ will appeal the judgment – and this give wriggle-room to anti-fluoridation councillors, and councillors worried they may still yet face costly legal action, to argue that fluoridation remain suspended.

And that is most probably their intention with the appeal. New Health NZ must realise that the thorough judgment really gives them no room to pursue their arguments. But tactically this appeal could continue the hiatus situation faced by Hamilton and other councils. A decision on the appeal could be delayed for another year or so – meanwhile a number of New Zealand cities could be denied the advantages of a well proven and safe social health measure.

That likely motive is politically cynical and I hope the appeal decision will award costs against New Health NZ for that reason. Mind you, a simple analysis of the links of New Health to the corporate interests of the “natural” health industry shows cost is not a problem for them.

The deep pockets of the anti-fluoridationists

This trust is also registered as a charity – which means we are all subsidising their campaigns via their tax exempt status. (Their charitable status really needs challenging).

However, the financial returns available on the NZ Charities Register shows large grants to the trust which in effect pay for their legal expenses (see figure below for year ended 31 March 2013). 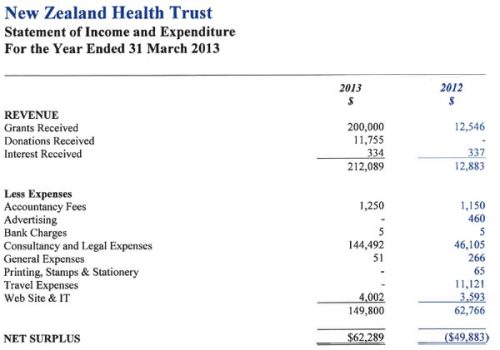 One report estimated the cost to the South Taranaki District Council of this High Court action was about $200,000. Relatively small change for the corporate funders of the NZ health Trust/New Health NZ – but certainly large enough to scare individual councillors.

The government should recognise that such a David vs Goliath situation gives an unfair advantage to these corporate interests. This, together with a highly motivated and organised group of anti-fluoride activists enables individual councils to be picked off one by one by a combination of political and financial pressure.

Most councils would prefer the responsibility of decisions on fluoridation be handed over to central government. The find the continual re-litigation of the issue by anti-fluoride activists frustrating, time-consuming and expensive. So far the current government has resisted these call. Perhaps, though, a useful interim step would be for central government to indemnify local bodies on the fluoridation issue.

This would remove the financial pressure of the sort used by the NZ Health Trust/New Health NZ on cash-strapped local councils.  The anti-fluoride movement would then be forced to deal with central bodies which have more substantial financial backing and better legal and scientific resources.

[116] New Health has challenged the Council’s decision to fluoridate the drinking water of Patea and Waverley on the grounds that:

(a) There was no legal power to do so.
(b) If there was power, its exercise by the Council was a breach of the right to refuse medical treatment in s 11 of NZBORA.
(c) In making the decision, the Council failed to take into account relevant considerations.

[117] I have rejected all grounds of challenge. I have concluded that there is implied power to fluoridate in the LGA [Local Government Act] 2002, as there had been in the antecedent legislation, the Municipal Corporations Act 1954 and the LGA 1974. The Health Act confirms that fluoride may be added to drinking water in accordance with drinking water standards issued under that Act. The power to fluoridate drinking water is not a regulatory function; it does not require express authority. Nor does a decision to fluoridate require the consent of the Minister of Health under the Medicines Act as water is not a food for the purpose of that Act.

[118] I have concluded that the fluoridation of water is not medical treatment for the purpose of s 11 of NZBORA [NZ Bill of Rights Act]. While I accept that fluoridation has a therapeutic purpose, I conclude that the means by which the purpose is effected does not constitute medical treatment. I am of the view that medical treatment is confined to direct interference with the body or state of mind of an individual and does not extend to public health interventions delivered to the inhabitants of a particular locality or the population at large. I see no material distinction between fluoridation and other established public health measures such as chlorination of water or the addition of iodine to salt.

[120] Finally, I examine whether the Council failed to take into account relevant considerations in reaching its decision. I am of the view that the Council was not required to take into account the controversial factual issues relied on by New Health. There is, nevertheless, a plenitude of evidence to show that the Council carefully considered the detailed submissions presented and reached its decision after anxious consideration of the evidence and careful deliberation.