What happens when fluoridation is stopped? 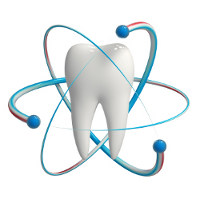 When fluoride becomes incorporated in teeth, it makes the enamel more resistant to demineralization, preventing the decay process. Illustration: TuftsNow.

“modern studies have not found tooth decay when fluoridation has been stopped in various communities.”

In chapter 5 of his book The Case Against Fluoride he provided more detail:

“there is no evidence that where fluoridation has been started and stopped in Europe there has been a rise in tooth decay. Indeed, two studies published in 2000, from Finland and the former East Germany, show that tooth decay continued to decline after fluoridation was halted.11,12 There have been similar reports from Cuba13 and Canada’s British Columbia.14“

Pretty definite claim isn’t it? “No evidence” of the expected increase in tooth decay after fluoridation is stopped. And he cites scientific reports to “prove” his claim. But what do those four scientific reports actually say? Let’s look at each one in order and, unlike Connett, I will quote from the papers.

11. L. Seppä, S. Kärkkäinen, and H. Hausen, “Caries Trends 1992–1998 in Two Low-Fluoride Finnish Towns Formerly with and without Fluoridation.” Caries Research 34, no. 6 (2000): 462–68. I can’t find the full text, or even an abstract, for this paper but the authors commented on this research in Seppa et al (2002). They found their “longitudinal approach did not reveal a lower caries occurrence in the fluoridated than in the low-fluoride reference community.” But commented:

“The main reason for the modest effect of water fluoridation in Finnish circumstances is probably the widespread use of other measures for caries prevention. The children have been exposed to such intense efforts to increase tooth resistance that the effect of water fluoridation does not show up any more. The results must not be extrapolated to countries with less intensive preventive dental care.”

“The causes for the changed caries trend were seen on the one hand in improvements in attitudes towards oral health behaviour and, on the other hand, to the broader availability and application of preventive measures (F-salt, F-toothpastes, fissure sealants etc.).”

13. W. Künzel and T. Fischer, “Caries Prevalence after Cessation of Water Fluoridation in La Salud, Cuba.  Caries Research 34, no. 1 (2000): 20–25. Again this study found no increase in caries after stopping fluoridation but the authors suggested why:

“A possible explanation for this unexpected finding and for the good oral health status of the children in La Salud is the effect of the school mouthrinsing programme, which has involved fortnightly mouthrinses with 0.2% NaF solutions (i.e. 15 times/year) since 1990.”

14. G. Maupomé, D. C. Clark, S. M. Levy, and J. Berkowitz, “Patterns of dental caries following the cessation of water fluoridation.” Community Dentistry and Oral Epidemiology 29, no. 1 (2001): 37–47. The authors reported “Caries incidence . . .  was not different between the still-fluoridating and fluoridation-ended communities.” However, they considered other factors and limitations in their own study and concluded this issue was complex:

“Our results suggest a complicated pattern of disease following cessation of fluoridation. Multiple sources of fluoride besides water fluoridation have made it more difficult to detect changes in the epidemiological profile of a population with generally low caries experience, and living in an affluent setting with widely accessible dental services. There are, however, subtle differences in caries and caries treatment experience between children living in fluoridated and fluoridation-ended areas.”

So when we actually read these cherry-picked reports we find that, while no increases in tooth decay were found after fluoridation stopped, in all 4 cases this was attributed to the existence of other sources of fluoride and fluoride dental treatments. This is a similar situation to that I reported about one of Colquhoun’s papers in my recent article Fluoridation: what about reports it is ineffective? In that case all children from non-fluoridated areas had been given six-monthly dental fluoride treatments whereas most children from fluoridated areas had not. So the lack of an effect due to fluoridation is hardly surprising.

This underlines the need to always read the scientific literature critically and intelligently, doing our best to avoid confirmation bias and cherry-picking. Perhaps that was Connett’s mistake – he was just selecting reports supporting his bias without being aware of these details. However, in his book he says:

“The ADA claims that in cases where fluoridation has been halted and no increase in tooth decay observed, other steps have been taken to fight tooth decay.”

So these details had been brought to his attention. But it did not stop him misrepresenting the scientific reports he cited. Nor has it stopped him continuing this misrepresentation, even today. All he has done is to attempt a diversion when these details arise:

“Whether or not that is the explanation, European countries have clearly demonstrated that there are other ways of reducing tooth decay without forcing everyone to take a medicine in their drinking water.”

He had the same response in our exchange when I pointed to the role of other fluoride treatments in these studies. Connett attempts to avoid the issue of his misrepresentation of the published science to support his claim that fluoride does not help prevent tooth decay – by acknowledging fluoride can be beneficial but pretending the argument was about the mode of delivery when it wasn’t!

Connett’s reference to ADA is actually to their booklet Fluoridation Facts. It appears the he has read page 15 – What happens if water fluoridation is discontinued. He has taken the 4 citations he uses from that page. But tellingly he ignores completely another 5 citations reporting deterioration of oral health when fluoridation was stopped. He cannot have missed those citations – in this case his cherry-picking amounts to dishonesty.

Studies do show increase in tooth decay when fluoridation stopped

The ADA booklet referred to above answers its question about the consequences of discontinuing fluoridation this way:

“Over time, dental decay can be expected to increase if water fluoridation in a community is discontinued, even if topical products such as fluoride toothpaste and fluoride rinses are widely used.”

In Fluoride debate: Ken Perrott’s closing response to Paul Connett? I discussed one of the ADA cited papers which did show an increase in tooth decay –  Attwood and Blinkhorn (1991),“Dental health in schoolchildren 5 years after water fluoridation ceased in South-west Scotland.”  They measured dmft and DMFT – decayed, missing and filled teeth in primary and permanent teeth respectively.

The figures below illustrate the data from this paper which compared changes in oral health of two Scottish towns  in both 1980 and 1988. One town, Annan, had never had fluoridated water while the other, Stranraer, had it until 1983. This enabled the effects of both cessation of fluoridation and the generally observed improvement in oral health due to other factors to be compared and considered. The graphics show the results for 5 year old and 10 year old children. 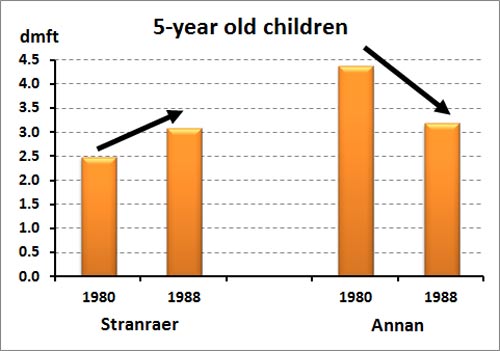 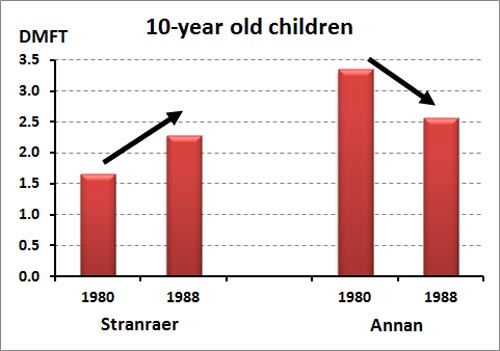 The plots indicate aspects of the complexity of these sort of studies. Because 2 different towns were compared it was possible to measure the decline in oral health after discontinuation of fluoridation against a background of the general improvement in oral health, even in a non-fluoridated situation.

The moral here is don’t accept at face value the claims made by anti-fluoridation propagandists – even if they, or their supporters, insist the propagandist is “the world expert on fluoridation.”

This entry was posted in Health and Medicine, SciBlogs, science, Science and Society and tagged Connett, fluoridation, fluoride, SciBlogs. Bookmark the permalink.

18 responses to “What happens when fluoridation is stopped?”