In my last post (Another fluoridation whopper from Declan Waugh) I described how Declan Waugh (a self-professed “scientist and fluoride researcher”) badly misrepresented data from a Finnish study which had concluded the prevalence of ailments attributed to fluoridation were “likely connected with psychological rather than physical effects of being exposed to fluoridated water.”

However, he has continued with his distortion and misrepresentation of the data in this study.  On Monday he claimed:

“The study into health effects of cessation in artificial fluoridation in Finland published in 1997 reported that within THREE WEEKS of stopping fluoridation and without the public being aware it had ended, respiratory ailments reduced by 31 per cent in adults.”

On Tuesday he presented another of his infamous bar graphs (see below) derived from manipulating data in the paper. 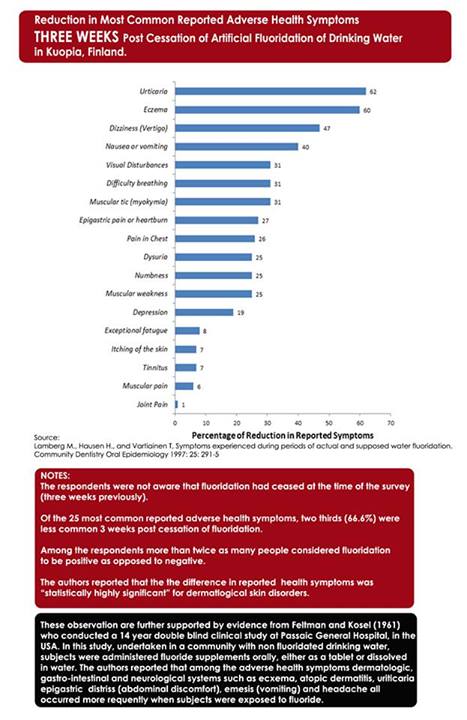 Here are my comments about this latest distortion.

1: The groups for the time when the drinking water was fluoridated and the time when it wasn’t (but people believed it was) were separate samples so any differences could simply reflect that fact. The authors noted people in the original fluoridated group “reported being slightly healthier than those in the” unfluoridated but unaware group. “Thus the smaller number of symptoms in the” later group “probably was not caused by cessation of fluoridation.”

2: Again, Waugh has taken a “percentage of a percentage” in his recalculations. In the process converting statistically insignificant differences into what seem like very large effects. In the table below I have shown how ridiculous this is for the ‘urticaria’ symptom. This had a prevalence of 1.3% in the fluoridated group, 0.5% in the unfluoridated but unknown group and 1.5% in the last known unfluoridated  group. These differences have no statistical significance but Waugh’s graph shows a huge 62% difference!

3: Waugh also grossly distorted the numbers claiming “more than 2 thirds of people actually felt better after fluoridation was stopped and they didn’t know it had.” But the Finnish authors described the incidence of symptoms in the unflouridated group as only “slightly more rare” with only one difference being statistically signficant. In fact, the better health of the unfluoridated but unknown group is really limited to the fact that 65.5% reported no ailments compared with 63.5% of the  fluoridated group (see table below) – a mere 2%, not two-thirds!

Although Declan Waugh’s graphical presentation grossly distorts the true data in the paper I have expanded it in the figure below to include all the ailments. Waugh had deleted the data for one-third of the ailments – presumably because their negative “percentage reduction” would have interfered with the misrepresentation he wished to convey. 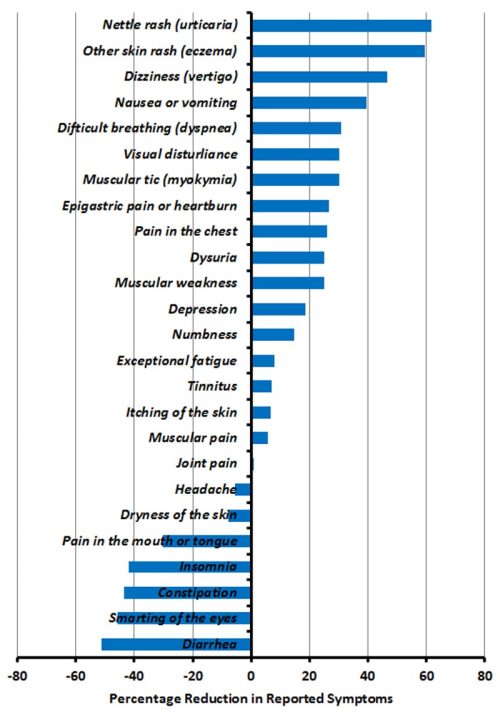 Actually, I cannot leave this with Waugh’s distortion of the data producing such high figures. Here is a more realistic presentation of the difference in percentage of reported ailments. Please note, Lamberg et al (1997) report that only significant difference is for “other skin rash” which the authors commented on – “this group of people should be studied further.” All other differences are in the -4 to +4% range.

Finally, a comment on an old study constantly being used by anti-fluoridation propagandists to “prove” claims of fluoride sensitivity. Waugh comments on the Lamberg et al (2007) study saying:

“Regretfully, the authors of this study did not refer to one of the only double blind clinical studies on fluoride every undertaken, and published, which also demonstrated similar outcomes from exposure to fluoride.”

He refers to the paper:

Feltman & Kosel (1961) did state they observed possible side effects of the fluoride treatment (use of fluoride tablets):

“One percent of our cases presented evidence of undesirable side effects from fluoride therapy. It is pointed out that if a patient is affected by the fluoride, by this method, the allergen or intoxicant  can be removed readily from the diet by discontinuace of the dietary supoplement.”

However, the paper did not present any data for side effects to support the statement. It is impossible to judge the validity of their conclusion. And Waugh is not able to produce a fancy but misleading bar graph from Feltman & Kosel (1961) as there isn’t any data to work with.

Again, Declan Waugh has been caught out distorting data to produce a completely unwarranted conclusion. In the process he has produced fancy-looking bar graphs which are misleading. This is not valid scientific evidence. It is dishonest distortion

However, this won’t stop Declan Waugh and other anti-fluoride propagandists presenting his claims and bar graphs to gullible city councillors. They will no doubt accompany these distortions with citation of Feltman & Kosel (1961) and Lamberg et al (2007) to make their submissions look sciency and “authoritative.”

It’s about time we exposed these frauds.

Note: I sent Declan Waugh a message bringing his attention to my earlier article (Another fluoridation whopper from Declan Waugh) but got no response. So I repeat my offer to Waugh that he debate his claim here. I am happy to give space for him to argue his case so that a proper scientific exchange can occur.

See also: Fluoride sensitivity – all in the mind?