I have followed events in Ukraine for a year now and learned very early on never to be surprised. There have been so many seemingly outrageous things happen. On the one hand this has kept the Ukrainian events in the news. On the other it probably serves as a warning. There is just so much corruption in that country that anything seems possible.

Since August there have been rumours of an agreement between Ukraine, Australia, the Netherlands and Belgium about revealing information from the MH17 investigations. Specifically an agreement on nondisclosure – that the results of the investigation will be published once completed only if a consensus agreement of all parties that have signed the agreement prevails.

While the source for this was apparently a statement made under the auspices of the office of the Prosecutor General Yuri Boychenko. I haven’t seen anything more official than that

Until recently when I came across this letter which appears to be a response to a Freedom of Information request in Australia. 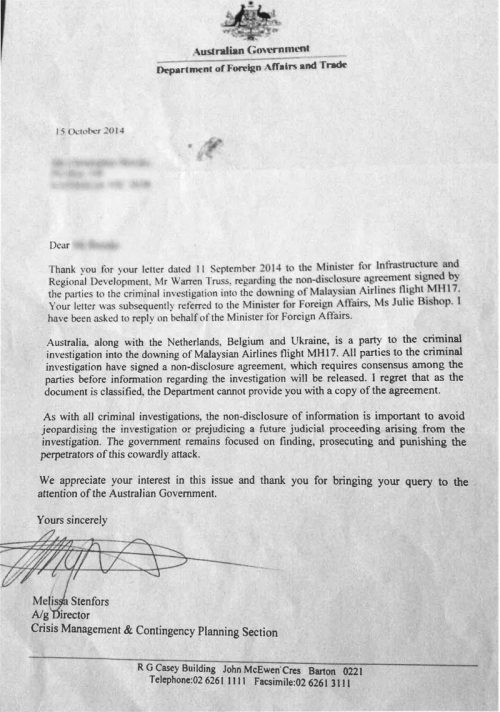 This confirms the existence of a nondisclosure agreement and that worries me for 3 reasons:

Yes, I know nondisclosure before a report is normal and reasonable. Even sensible because of the rumour mongering and political maneuvering around such events – particularly this event. But why make the nondisclosure agreement itself a state secret? What could they have to hide?

And why exclude Malaysia? I have picked up excuses relating to the existence of a death penalty in Malaysia – but how should that effect this agreement?

I can’t help feeling this has more to do with the fact that Malaysia has got off-side with the Kiev government because it was prepared to negotiate with the authorities in the crash area. That contact enabled early progress in recovery of the black boxes and bodies. The OSCE observers also were able to give early help because of their contacts with these authorities. In contrast, the Dutch investigation and recovery teams have been extremely tardy because of their unwillingness for direct contact. And their apparent subservience to the wishes of the Kiev government who have discouraged this contact. 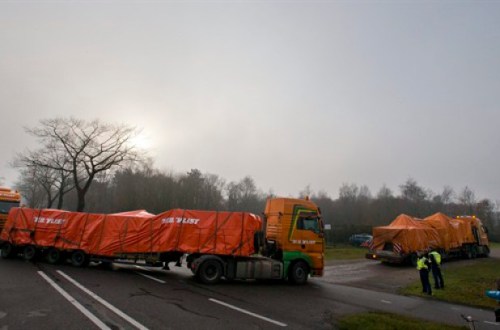 Many wild accusation have been made against Vladimir Putin, the president of the Russian Federation, over this incident. But he at least retained the moral high ground when he warned governments and politicians not to use this tragedy for political purposes.

I think that warning was humane and important. Those using this tragedy for political purposes are showing the worst form of disrespect for the almost 300 innocent victims.

But won’t the governments and investigators who conspire to withhold information or findings also be showing the same disrespect? 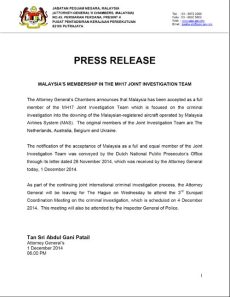 Malaysia annnounced last week, 4 months after the above agreement was signed, it has been accepted as a full member of the MH17 joint investigation team (see MH17: Malaysia to help identify perpetrators: Liow.

I cannot find any indication that this means it has signed the secret non-disclosure agreement or not. 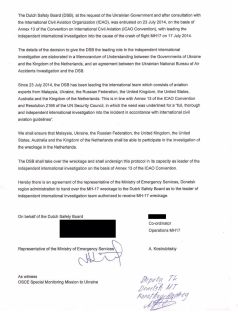 Also, the Dutch investigation team did eventually get around to negotiating with the local authorities in the crash area – and this lead to rapid decisions (on November 20) on collection and removal of the wreckage to the Netherlands.

This could have happened so much more quickly.