Fluoridation: Making sense of the Ministry of Health data

Every year local anti-fluoride activists eagerly await release of the latest Ministry of Health (MoH) data on the oral health of New Zealand School children. These data are a mine of examples which can be cherry-picked to argue that community water fluoridation is ineffective – or even that the oral health of children in non-fluoridated areas is better than fluoridated areas.

Well, the latest data (for 2015) has just been released and the anti-fluoridationist reaction is typical. They are presenting selected data to argue that “the gap [between the numbers of caries-free children in fluoridated and non-fluoridated areas] has become practically non-existent.”

And the make a big thing of comparing this “practically non-existent” gap with the 40% difference claim they attribute to the MoH. Needless to say, they are wrong.

Let’s have a look at what the 2105 data shows, how this compares with data from previous years and what the limitations of the data, and consequently any conclusions drawn from the data, are.

The figures below show the data – I have included it in graphs showing the data for earlier years. Notice that the data is for Māori and “Other.” This is because the “Total” figures in the data tables throw all ethnic groups together and are therefore misleading. As I have pointed out several times in the past (Anti-fluoridation cherry-pickers at it again,  A challenge to anti-fluoridationers to justify their misrepresentation of New Zealand research, Debunking anti-fluoridationist’s remaining 12 reasons for opposing fluoridation and Schluter & Lee 2016 noted in their paper Water fluoridation and ethnic inequities in dental caries profiles of New Zealand children aged 5 and 12–13 years: analysis of national cross-sectional registry databases for the decade 2004–2013), Pacific island children, whose oral health is poorer than other groups, are concentrated in fluoridated areas of Auckland. This distorts the “Total” figures (in particular underestimating the oral health for fluoridated areas). Local anti-fluoride propagandists have taken advantage of this in the past to make untruthful claims.

The “Other” group will be mainly Pakeha, but also will contain some Asian. I have not included the data for Pacific island children – the relatively small number in non-fluoridated areas mean the comparison is rather erratic.

Data are presented for “% caries-free” – the proportion of children with no tooth decay, and mean dmft – the average number of decayed missing or filled tooth for each child.

It’s worth looking at average effects out over several years to limit the effect of variability in the data. The is the result of the effect of fluoridation in reducing tooth decay (using % caries-free figures) – average effect in the period 2005 – 2015.

Problems with the data

Of course, this data is not meant to provide definitive measurements – it is simply the records for oral health (% caries-free and dmft) for different regions. There has been no determined effort to make sure that the resident regions of the child are the same as the school region. While there is some separation into ethnic groups there has been no effort to take into account factors like sex differences, socio-economic influences, dietary differences, and other dental treatment differences. For example, in some regions the health authorities have a programme of treating children in non-fluoridated areas with fluoride varnishes or taking extra steps to provide access to dentists.

It’s interesting that the anti-fluoride people prefer such data to more definitive data corrected for problems. Well, they do at the moment as they are cherry picking to support their claims (see MoH says Fluoridation reduces dental decay by 40% – No it doesn’t!). They are very critical of data from the MoH’s New Zealand Oral health Survey. The MoH acknowledged limitations inherent in this survey for determining an effect of fluoridation – and the anti-fluoride people love to quote that acknowledgment. But at least the Survey did give data:

Instead, the anti-fluoride people rely on cherry-picked comparisons from data where no such adjustments have been made. And they never acknowledge the limitations of that data.

The graphs above do show a tendency for the fluoridated and non-fluoridated lines to approach each other. One could speculate on the reasons and more definitive studies are required to check out such speculation. But here are some of my ideas:

The results could be influenced by changes in residential vs school or dental clinic location. For example, the introduction of “hub and spoke” dental clinics during the 2000s may mean that more children now live in a region with different access to fluoridated water than that for the clinic or school. The recent provision of extra dental care, such as fluoride varnishes or more dentist visits in non-fluoridated areas, is also a likely possibility.

But another possibility is that the efficacy of community water fluoridation is declining – maybe because of better health care, diet, and parental responsibility. In fact, the evidence indicates that community water fluoridation may now have less importance in some cases than dietary intake from other food sources. This graph from a US Environmental Protection Agency report (Fluoride: Exposure and Relative Source Contribution Analysis) shows fluoridated water may now contribute less than 50% of the dietary intake for many children and certainly no more than 70%. 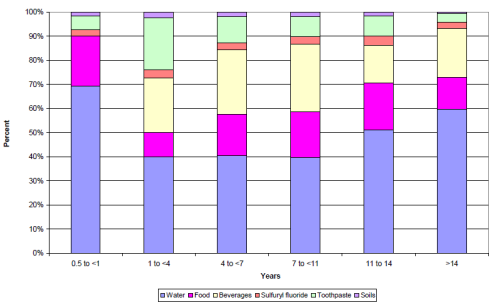 This has resulted in a “Halo effect.” Because processed foods and beverages now contain more fluoride than in the past (when non-fluoridated water may have been used in processing) the difference in total dietary fluoride intake between children living in fluoridated and non-fluoridated areas has been reduced. The common use of fluoridated toothpaste also contributes to this “Halo Effect.”

This does raise the question – if community water fluoridation is less important as a dietary source perhaps it could be stopped? Although the warning is that if community water fluoridation was stopped perhaps other dietary sources like processed foods and beverages would have a lower fluoride content and dietary intake would then fall below optimum levels.

Once again the local anti-fluoride activists have been caught out misrepresenting the MoH data by cherry-picking and purposely ignoring important factors like ethnicity.

This entry was posted in Uncategorized. Bookmark the permalink.