The Green et al (2019) fluoride/IQ is certainly controversial – as would be expected from its subject (see If at first you don’t succeed . . . statistical manipulation might help and Politics of science – making a silk purse out of a sow’s ear). Anti-fluoride campaigners have been actively promoting it as the best thing since sliced bread. But it has not received the same glorification from most experts.

The UK Science Media Centre published a list of reactions from experts (see expert reaction to study looking at maternal exposure to fluoride and IQ in children) and they are worth reading. Also, there are comments from Dr F. Perry Wilson presented in the video above.

Wilson raises some very valid criticisms, a few of which (such as the weakness of the reported relationship) I have dealt with. He also brings attention to how even that weak relationship appears to be strongly affected by extreme values (particularly the few high values for maternal urinary fluoride).

“But as you can see from the scatter plot, the effect was really small—about 1.5 IQ points for moving between the 25th and 75th percentiles of urinary fluoride.”

This is from the data presented in the paper’s Table 2. This low value was not really discussed by the authors who instead promoted an effect of 4.5 IQ points using data covering the whole range, including the unrealistically high urinary F values.

I have already commented in the previous articles on how weak the child IQ – maternal Urinary Fluoride relationship is and how it has no predictive value (see If at first you don’t succeed . . . statistical manipulation might help and Politics of science – making a silk purse out of a sow’s ear). Also, as the mean IQ values for all children and separately for boys and girls are not affected by the residence of mothers in fluoridated and unfluoridated areas it is likely that even this weak relationship is anomalous.

However to return to Dr F. Perry  I have reproduced the transcript of his talk below as he does make a number of valid points worth considering.

Usually, as studies come across my desk, I say, “Oh, that one is interesting” and dig in to see if it’s worth spending a few minutes of your time on. This week, I saw this study appearing in JAMA Pediatrics and just thought, “Oh no.”

This is one of those studies that I just knew would blow up, and probably for the wrong reasons.

Despite robust evidence that fluoridation of water reduces the incidence of cavities in kids, it has long been a bugaboo of conspiracy buffs, ranging from General Jack D. Ripper to Alex Jones.

No one ever seems to complain about chlorinating water, but whatever.

In any case, the argument that fluoridation is a secret communist plot has never held water, but several prior medical studies have documented a link, however small, between fluoride exposure and lower IQ in children. But all of those prior studies were flawed in one way or another, most often because the exposure was orders of magnitude higher than what is seen in the fluoridated water supply.

Enter JAMA Pediatrics, with what is really the best study to date of the effect of fluoride on IQ. Five hundred and twelve mother-child pairs from Canada were recruited during pregnancy and followed until the kids were around 3-4 years of age. At three points during pregnancy, the moms had their urinary fluoride concentrations measured. These measurements were averaged, and the researchers report that moms with higher levels had kids with lower IQs. 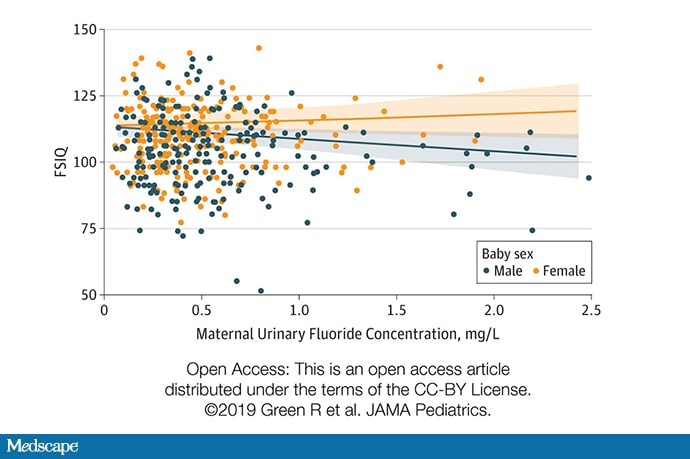 Well, for boys, at least. No effect was seen in girls. But as you can see from the scatter plot, the effect was really small—about 1.5 IQ points for moving between the 25th and 75th percentiles of urinary fluoride.

This held up even after adjusting for city, maternal education, race, child sex, and a score that measures the quality of the home environment.

Yikes, right? Is fluoridation causing a process of “dumbening”? Is “dumbening” even a word?

First, this was not a randomized trial. No one was giving these moms fluoride or regulating what they drank, so confounders could be a major issue. I’m particularly worried about socioeconomic factors that may be linked to fluoridated water consumption and also children’s IQ.

But there’s potentially a bigger problem. The plausible mechanism for neurotoxicity of fluoride in utero is that blood fluoride crosses the placenta and gets into the fetus’ developing brain. Like this. 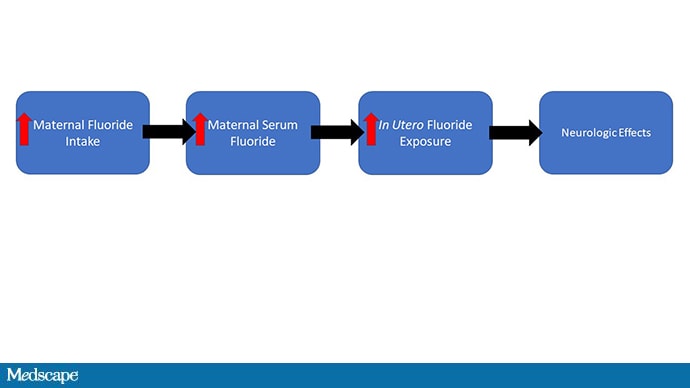 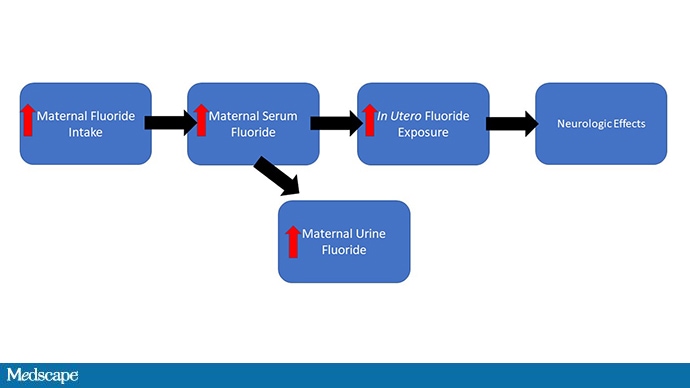 The authors know this. They realize, for example, that more dilute urine will have a lower fluoride concentration, and they “correct” this problem by dividing urinary fluoride by urine specific gravity. 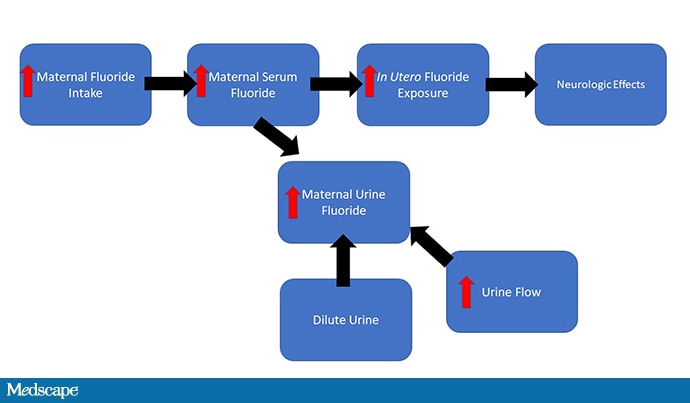 But this introduces a new variable. Assuming that fluoride has no effect on a child’s IQ, you could get results that look like this if moms with more dilute urine tend to have kids with lower IQs.

But wait, there’s more. Fluoride is freely filtered at the glomerulus, but it is reabsorbed in the renal tubules. This is a pH-dependent process,[2] with more reabsorption occurring when the pH is lower. That means that women with higher urinary pH (due to a more vegetarian diet or just prolonged fasting) will, on average, have higher urinary fluoride levels. 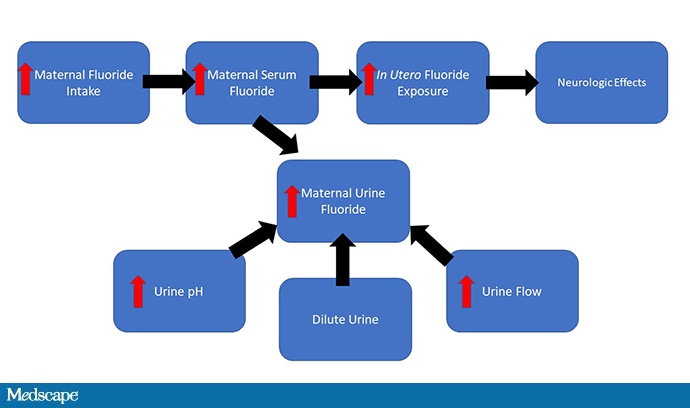 Another confounder, this one unaccounted for.

Does the presence of possible confounders invalidate the study? Of course not, but these factors remind us to interpret results like this very carefully, especially when the documented benefits of fluoridation rest on much firmer scientific footing than the possible harms.

This entry was posted in Health and Medicine, SciBlogs, Science and Society and tagged Canada, fluoride, IQ, maternal urinary fluoride. Bookmark the permalink.