Children used in this study were from Lintingkou town (a normal-fluoride/control area) and Dakoutun town (a high-fluoride area) in Baodi district of Tianjin, China. The towns are 25 km apart.

Anti-fluoridation activists on social media seem to cite any scientific article about fluoride which they think will show it harmful. They usually rely only on information in the article title or abstract. This means they are often wrong as the articles may not be at all relevant to the low fluoride concentrations used in water fluoridation. Perhaps they should stop for a minute and actually read the articles they cite.

The other day @NYSCOF, the twitter account for the New York State Coalition Opposed to Fluoridation, Inc (a small antifluoridation activist group in New York) promoted a new Chinese study as part of its campaign against community water fluoridation (CWF). It claimed: “Children’s IQ was lower when water and urinary fluoride levels were high compared to a low fluoride group.” But the fact this is a Chinese study should have warned the honest reader that the “high” fluoride group lived in an area of endemic fluorosis and data for them is irrelevant to CWF.

In fact, some of the data in their paper are relevant to CWF – the data for the “low fluoride” control group where children were exposed to drinking water concentrations less than 1 mg/L (CWF aims to maintain a drinking water fluoride concentration of about 0.7 or 0.8 mg/L). It’s worth looking at that data to see if child IQ is related to fluoride exposure at that level.

The take-home message is that it isn’t.

Here is the citation for the new study:

The children (8-12 year-olds) in this study came from two different communities in the Baodi district of Tianjin, China – see the map above. They are Lintingkou town, where drinking water fluoride concentrations were “normal,” and Dakoutun town, which is in an area of endemic fluorosis and the drinking water fluoride concentrations are high (about 1 to 3.5 mg/L). The towns are about 25 km apart and will clearly have a number of differences which could be relevant to the IQ of children. Possible confounders like this were not considered in the study. 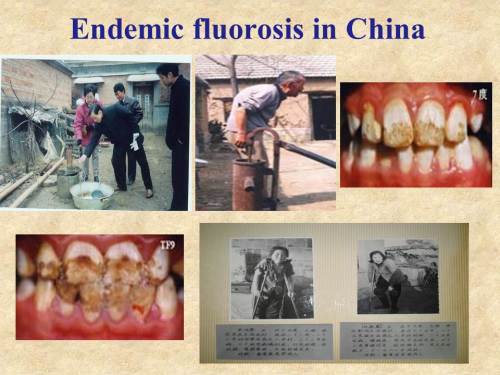 The figure below from the paper illustrates the ranges of drinking water F and urinary F for the children studied (30 in each of the “low” and “high” fluoride groups). 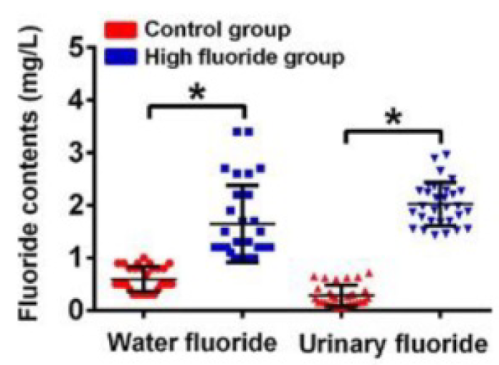 Only the data for the “control” group are relevant to CWF. Unfortunately, the authors chose to plot the IQ data for the two groups on the same graph and concluded that this showed a “fluoride-caused intellectual loss in children” – see their graph below.

But, their conclusion is wrong. When we look at the data for the “control” and “high fluoride” groups separately that simple conclusion is clearly unwarranted.  In fact, there is no statistically significant relationship (p<0.05) of child IQ with urinary F for either the “low” or the “high” group – see the graph below which uses digitally extracted data from the above figure. Data points for the”low” fluoride group are green and those for the “high” fluoride group are red.

There is no relationship between child IQ and urinary fluoride in either population. All the regression analysis shows is that there is a difference between the two towns – and that is simply shown by the average values of IQ in those towns. The average child IQ in Lintingkou town is 112.4 while in Dakoutun town it is 98.5.

While these IQ values seem pretty good (usually the average IQ for a population is 100) the lower value for Dakoutun town is not surprising considering that the population living in areas of endemic fluorosis suffer a whole range of health and social problems.

The biochemical data has the same problem

The paper itself is a real hodgepodge of separate studies involving child IQ, levels of mitochondrial biogenesis signalling molecules, experiments with rats and with in vitro cell cultures. I do not have the expertise to critique the biochemical, cell culture and rat behavioural techniques used. However, the presentation of the biochemical data for the children suffers the same problems as the presentation of the IQ data.

The authors claim that there is a significant positive relationship between the silent information regulator 1 (SIRT1) and child urinary F, and significant negative relationships of peroxisome proliferator-activated receptor γ coactivator-1α (PGC-1α) and mitochondrial transcription factor A (TFAM) with child urinary F. But they simply lumped the data for the two towns together. When the data for the two groups are considered separately there are no statistically significant relationships for these biochemical measures in either of the two groups – see figures below. Again, data points for the “low” fluoride group are green and those for the “high” fluoride group are red.

Yet against anti-fluoride campaigners are promoting a study that they probably haven’t even bothered reading. They are using results for an area of endemic fluorosis to argue against CWF. Worse, they are completely ignoring the data in this and similar studies which show no relationship between child IQ and fluoride exposure at fluoride levels relevant to CWF.

The Twitter account @NYSCOF promoting this specific study is very active and is connected with the Fluoride Action Network (FAN) through Carol Kopf –  the media officer for both the New York State Coalition Opposed to Fluoridation, Inc. (NYSCOF) and FAN. Ironically, she uses the slogan “I Am a Force for Science” on her Twitter image.

Sometimes I drop a reply to her posts – in this case pointing out: “And no loss of IQ at F concentrations relevant to community water fluoridation. These studies show CWF safe.”

My comment will not change Carol Kopf’s mind, of course, but others may read it and understand. Mind you, it’s inevitable that other anti-fluoride activists see my comments and react in stupid ways. For example, one of the Fluoride Free NZ leaders, Kane Kitchener, posted this reply:

“Ken, you’ve been exposed too long by Hamilton’s Fluoridated water. Too much reduction in IQ to see it.”

It really is pointless attempting to discuss science with these people.

Would you be interested to know that no studies have been conducted on fluoridated water at 0.7ppm to determine whether there is IQ reduction? The National Toxicology Program are currently completing research to fill this gap. You would have thought that they would have done this in the 1950s before starting the fluoridation program wouldn’t you?

There have actually been three recent studies from three different countries which have specifically investigated the claim of an effect of fluoridation on IQ – and, unsurprisingly, all threes studies showed there was no effect.

Here are those studies:

In fact, anti-fluoride activists in the US, as well as New Zealand, have campaigned against this study. Their major criticism is that the study also included the effect of fluoride tablet use. They argue that this makes the unfluoridated control group useless because many participants will have consumed fluoride tablets. However, they ignore the fact that the statistical analysis corrected for this but still found no statistically significant difference in IQ of children and adults from fluoridated and unfluoridated areas.

Other critics of the Broadbent et al. (2014) study have raised the issue of experimental power because of the numbers of people in the study. This could be a valid issue as it would determine the minimum effect size capable of being detected. Aggeborn & Öhman (2016) made that criticism of Broadbent et al., (2016) and all other fluoride-IQ studies. Their study is reported at:

Aggeborn & Öhman (2016) used much larger sample size than any of the other studies – over 81,000 observations compared with around 1000 or less for the commonly cited studies. It was also made on continually varying fluoride concentrations using the natural fluoride levels in Swedish drinking waters (the concentrations are similar to those in fluoridated communities), rather than the less effective approach of simply comparing two villages or fluoridated and unfluoridated regions. The confidence intervals were much smaller than those of other cited fluoride-IQ studies. This makes their conclusion that there was no effect of fluoride on cognitive measurements much more definitive. Incidentally, their study also indicated no effect of fluoride on the diagnosis of ADHD or muscular and skeleton diseases.

Another recent fluoridation-IQ study is that of Barbario (2016) made in Canada:

Barberio, AM. (2016). A Canadian Population-based Study of the Relationship between Fluoride Exposure and Indicators of Cognitive and Thyroid Functioning; Implications for Community Water Fluoridation. M. Sc. Thesis; Community Health Sciences, University of Calgary.

This study also had a large sample size – over 2,500 observations. This reported no statistically significant relationship of cognitive deficits to water fluoride.

Incidentally, Barberio (2016) also found there was no evidence of any relationship between fluoride exposure and thyroid functioning. That puts another pet claim of anti-fluoride campaigners to rest.

So much for NZFF’s claim that “no studies have been conducted on fluoridated water at 0.7ppm to determine whether there is IQ reduction.” But, just a minute, they are quoting the National Toxicology Program (NTP):

“No studies evaluated developmental exposure to fluoride at levels as low as 0.7 parts per million, the recommended level for community water fluoridation in the United States. Additional research is needed.”

But they omit the next sentence from the quote:

“NTP is conducting laboratory studies in rodents to fill data gaps identified in the systematic review of the animal studies.”

The NTP is discussing the research with animals, mainly rats, where effects of fluoride on the cognitive behaviour of the test animals have been reported but the fluoride concentrations are very high. And NTP’s assessment base on the review of the literature found only “a low to moderate level of evidence that the studies support adverse effects on learning and memory in animals exposed to fluoride in the diet or drinking water.” Hence the need for more research.

As part of the NTP’s research, which is currently underway, there are plans to extend studies to low fluoride concentrations more typical of that used in community water fluoridation.

The high concentrations used in animal studies is a major flaw in the anti-fluoride activist use of them to oppose community water fluoridation. For example, Mullinex et al (1995) (very commonly cited by anti-fluoride campaigners) fed test animals drinking water with up to 125 mg/L of fluoride (concentrations near 0.8 mg/L of fluoride are used in community water fluoridation).

While it is unlikely that the NTP research will find any significant effects of fluoride on the cognitive behaviour of rats at the low concentrations used in community water fluoridation the anti-fluoride campaigners have their fingers (and probably toes as well) crossed.

NTP will begin publishing the results of their new research next year (see Fluoride and IQ – another study coming up).