Here’s a book for lovers of animals – and philosophy. But also for those who are willing to delve into the evolutionary origins of human morality. 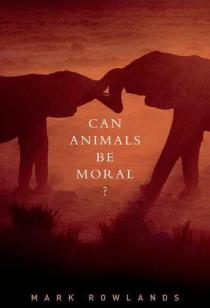 Book review: Can Animals Be Moral?

Interested readers need to know – this is a book about philosophy, not science. I guess this makes the book more interesting to philosophers than scientists. And some familiarity with the philosophers whose arguments the author quotes and criticises will add to that interest.

However, Rowlands does not ignore the science. He refers to the scientific evidence for moral considerations by non-human animals (see video below for an example). A plus in my view as some philosophers seem to happily debate these sorts of issues without relying on any empirical evidence at all. But, as a philosopher, Rowlands assumes “only that the evidence makes a prima facie case for the claim that animals can be motivated to act by emotions—all   species of concern—that have an identifiable moral content. This assumption is the point of departure for the arguments to be developed in this book.”

Rowlands is also very clear from the beginning that his answer to the book title’s question is definitely “Yes.” He describes the purpose of his book this way:

“I try to show that the blanket dismissal of the possibility of moral action in animals cannot be sustained because it rests on certain assumptions that are controversial and would be rejected by many, often the majority, of philosophers. Essentially, the blanket dismissal requires that one be willing to pitch one’s tent in certain philosophical camps—camps in which many, perhaps most, philosophers would not be seen dead. Second, and equally important, I shall try to show that there are indeed good reasons to eschew these camps.”

Apparently, among philosophers, Rowlands’s view is a minority one:

“The history of philosophy has reached a near unanimous decision on the central question of this book. No, animals cannot be moral. They cannot act for moral reasons, or on the basis of moral considerations.”

“The positive goal of this book  is to show that animals can be motivated by moral concerns, and these concerns take the form of emotions that have identifiable moral content. The corresponding negative goals of this book are to show that the respectable reasons against this claim fall far short of   compelling, to unmask confusions, and to banish the fruits of magical thinking.”

I won’t go into the philosophical details but Rowlands argues for animals being moral because they can act on the basics of moral emotions. They have feelings and emotional reactions to situations and acting on these is enough for acting morally. But he acknowledges that emotions and sentiments are not the only sorts of moral reasons there are, saying, “I certainly would not object to the claim that there are moral reasons available to humans that do not reduce to emotions or sentiments.”

This leads him into definitional issues. We consider moral agents, moral subjects, etc. Moral subjects can act on the basis of motivations such as emotions and feelings. But a moral agent has the ability to reflect on these motivations and actions, can explicitly formulate or understand the principles behind the action and may be able to adopt an impartial perspective of the sort required for a sense of justice.

Rowlands sees many, particularly social, non-human species as being moral subjects. But only humans have the ability to reflect, deliberate and consider abstractly, to be moral agents.

Using this book’s terms in many ways and many situations humans, although capable of moral agency, will behave as moral subjects. Rowlands discusses this in his philosophical arguments and provides explanatory examples. But this could have been helped by the scientific evidence showing that a lot of human moral actions are unconscious.

Moral autonomy – a degree of agency

Even among humans the degree of moral agency can vary. Some individuals may be more morally autonomous than others. They may often indulge in abstract moral reasoning, discussion and reading. They may possibly consciously reject some contemporary moral ideas and values. Other individuals may not be so reflective. Their rational consideration may be restricted to rationalising the automatic behaviour they exhibit. And they may be more unquestioning of the contemporary social mores and customs. They may even be willing to rely on social and religious authorities as the source of their moral values. Moral agency for many humans may be more potential than actual.

“A stronger view might claim that one possesses moral autonomy only when one is actually engaged in these processes. That is, moral autonomy turns on the exercise of the ability and not simply possession of the ability. This view entails that humans are morally autonomous individuals only on relatively infrequent occasions— and that some humans are, perhaps, never morally autonomous.”

The book does not really discuss the way humans learn their morality during their development, or manage to adjust their moral codes to accommodate changing social values. Not surprising as it is about non-human animals. But it does discuss briefly the somewhat equivalent role of training that can influence those non-human animals who live closely with us. Some of this training can involve moral concerns – such as where pets are taught to be careful with young children.

Given the continuity of life inherent in a scientific evolutionary view  a continuity among different animal species in their moral instincts and concerns is not surprising. This supports modern changes in the way we consider non-human animals. Rowlands reflects this with the last sentence in the book:

“If animals can, and sometimes do, act for moral reasons, then they are worthy objects of moral respect. That is why it matters.”

I give more credence to scientific findings than philosophical deliberations. However, these are interesting in this case – even if more for characterisation of different philosophical schools. But while such deliberations may well appeal to the philosophically inclined by their very nature they usually cannot settle the argument. At times I felt the book had a tendency to philosophical argument at length where reference to empirical evidence may have sufficed.

Another criticism I have is the occasional use of Latin terms without definition. And use of philosophical shorthand not usually familiar to the lay person.

However, I felt the author’s presentation is careful. He gives reminders of his own position from time to time so one is not trapped into thinking he is advocating another position when he is merely outlining opposing arguments. This is helpful to the reader.

On balance I think the thorough philosophical consideration in this book does complement other, scientific, texts. For example, consideration of differences between moral subjects and moral agents provides a clearer picture than use of terms like “pre-moral” which authors like Frans de Waal and Michael Shermer have resorted to when describing the moral behaviour of non-human animals. Rowlands provides a philosophical clarity to the scientific findings.

See also:
Scientist argues that animals are moral creatures
Can Animals Be Moral?

An aside – philosophers who naively use science

Rowlands does not distort the science on this issue – he uses it honestly. Some philosophers are not honest when discussing issues related to non-human animals. They can resort to subtle differences in definition – even to motivated reasoning, usually to support their own bias. W. L. Craig’s recent attempts to claim that non-human animals might feel pain but don’t suffer is a rather blatant example. He misrepresents the science in his justification – claiming humans are the only animals with a pre-frontal cortex necessary for the self awareness required to experience suffering. (Misrepresenting science so as to use it as “evidence” for his religious and supernatural beliefs is a common trick of Craig’s as anyone familiar with his treatment if cosmology knows). Craig also relies on selective definitions if awareness, self-awareness and suffering to bolster his argument. (See this video for details).

Can animals suffer? Debunking the philosophers who say no, from Descartes to William Lane Craig