Our Far South – time we learned about it

This is Gareth Morgan’s second to last book. It is very relevant to new Zealanders – and timely – because it deals with part of the world, our Far South, which is very important but often ignored. Well written and informative. 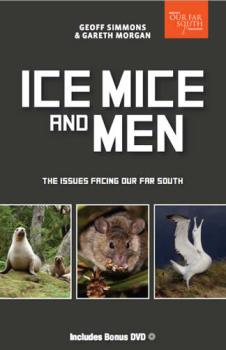 Antarctica brings to mind nature documentaries and penguins. Beautiful snowscapes and adventure. Maybe even of science and scientists working in harsh conditions.

But what about its ecological and political importance? Well, some climate change deniers/contrarians/sceptics/cranks have lately turned their attention to Antarctica in an attempt to “balance” the record breaking summer ice loss in the Arctic. I guess that’s a start – but what role do the Antarctic and the Southern Ocean really play in climate change. What about its natural resources and unique species? What are the governance issues – so many countries are interested in the area and many have a presence? And what does this all mean for New Zealand?

The first figure in this book (see below) shows our political and economic territorial interests in this area and suggest why we should perhaps pay more attention. Especially as the rest of the world is.

Territory of our Far South (All figures from book)

But there is also climate change – which interests all of us. Geoff Simmons & Gareth Morgandescribe the Southern ocean as:

“the engine room of the global ocean, and of the world’s climate. That is what many of us don’t realise and in our ignorance we’re complacent about the changes it is undergoing.”

So it’s about time the world, and New Zealand in particular, learned more about this region because the political, economic and ecological changes will eventually effect all of us. That makes this book very timely.

The book proves to be successful in its aim. It provides a very readable overview of the important issues: the history of the region; its resources and the battle to exploit them; international governance – the nature of the treaties covering the region and their problems; the ecology of the region – the threats to rare species, management of fisheries and problems with introduced species; climate change – the key role of the Southern Ocean and the Antarctic Circumpolar Current (ACC) in circulating nutrients around the world’s oceans and as an important sink for heat and carbon dioxide (CO2).

The book describes the formation of the ACC this way:

“Some 34 million years ago, Australia and Zealandia separated from Antarctica, and along with a mobile South America created a passage of deep water all the way around the Southern Hemisphere. The opening of this last gap, between the tip of South America and the Antarctic Peninsula (known as the Drake Passage) allowed the westerly winds and currents an unimpeded romp around the globe. This accident of geography created the world’s greatest current system – the ACC. And it was the inauguration of the ACC that directly contributed to a massive shift in the Earth’s climate from hot to cold, . . “

This current, together with churning of the sea by wind, resulted in removal of carbon dioxide and heat from the atmosphere as well as transport of nutrients from the sea bed. The result, a cooling of the global climate, appearance of ice sheets in Antarctica, and a key role for the ACC in nutrient supply to the world oceans. As the authors say: without the ACC “we would have a much warmer planet, which means higher sea levels, and less land – and frankly, it’s quite likely we wouldn’t exist.”

The key role of the ACC in global climate, the world’s weather systems and insulation of the Antarctica continues today. The churning of sea by the wind and the low temperature of the water enables the current to carry heat and CO2 to middle depths and transport them around the world. The result: “40% of the carbon stored in the ocean is taken in between 30 degrees south and 50 degrees south.”

The ACC needs to be monitored closely – it’s important and climate change seems to be changing the workings of the ACC itself. There have been changes of wind and current speed and of location of the ACC which could have global consequences

Simmons and  Morgan summarise it this way:

Our Far South “is a place of incalculable importance to New Zealand and to the entire world. The ecosystem, climate and the actions of humankind are irrevocably intertwined – maybe here more than anywhere else on the planet. . . having a continent on our southern pole, surrounded by ocean and carrying an immense quantity of ice is part of what makes our planet’s current climate so hospitable”

Even from the perspective of climate change alone we need to be more aware of what is happening in our Southern Oceans.

Although the sea floor of the Ross Sea and similar places are exceptions, most of Our Far south is not very diverse biologically. This makes it sensitive to losses of even a few species. Differences between the Southern Ocean and Northern Hemisphere add to this sensitivity. For example the lack of land mean there are no terrestrial sources of iron, no dust blowing of deserts. Algae require iron and even trace amounts make a huge difference to biological production. Circulation of nutrients to the global ocean by the ACC means conservation and study of the Southern Ocean and Antarctica is important. Unfortunately scientific research is under pressure to support commercial exploitation of the resources, rather than conservation.

One area New Zealand scientists has had success is in eradication of introduced pests from islands to our south. And this work is continuing. One of the authors, Gareth Morgan, supports this work through a charitable trust. So it’s fitting that he gives an invitation to readers at the end of the book:

“If you would like to help make a difference to Our Far South you can contribute to the Million Dollar Mouse project at www.milliondollarmouse.org”

The rush to exploit resources

Antarctica and the Southern Oceans have probably fared better than the Arctic region in the race for territory and resources. Nevertheless, there has been a rush here and New Zealand has contributed to this, as well as benefited from it:

“Thanks to our rapacious sealing, whaling and farming in the subantarctic islands (a legacy from which they are still recovering), New Zealand was able to secure sovereignty over those rocky isles. This in turn gained us one of the largest areas of EEZ (Extended Economic Zone) in the world.

I am old enough to remember the scientific activity and the cooperative spirit behind it during the International Geophysical Year in 1957. This enthusiasm provided political support for an international agreement on management of Antarctica and a Treaty was signed in 1959.

The Antarctic Treaty temporarily resolved territorial disputes on that continent by agreeing to disagree over sovereignty. This Treaty has proved incredibly successful at ensuring the continent is dedicated to peace and science. This is in our interest: we are just too small to get into a turf war. It left New Zealand with the Ross dependency. That, together with our EEZ, one of the largest in the world, and our extended continental shelf (see first figure) makes us an important player in the region, politically and economically. But the Treaty simply froze the status quo from the 1950s and the balance of world power is changing.

Of course this means New Zealand also has huge responsibilities in the political future of the region and exploitation of its natural resources. We really should be paying more attention here.

Whaling, and the threat of extinction to some species, has reached the attention of the New Zealand public which has an awareness of its relevance to our region and the Southern Ocean. While international negotiation and political protest action concentrate on whaling itself, and those nations which still kill whales, there is also a threat to whales in the region from climate change. The subtle change in nutrient flows influence the populations of species which whales feed on.

Many of us are also vaguely conscious of an ongoing struggle between conversation and exploitation of fish in Our Far South.* This is hugely controversial because science is used to manage fisheries, but also to exploit the same fisheries. It’s often hard to know who is winning – but most of us suspect commercial and not conservation interests prevail. On the other hand it is true that sensible conservation must often allow for controlled exploitation.

Toothfish in the Southern oceans has been very much in the news lately. Some scientists are very critical of it’s commercial exploitation because so little is known about the species. However, others believe it to be one of New Zealand’s  success stories. The authors discuss the controversy and their sympathies lie with the fisheries. They say

“Our fishing industry is by no means perfect, but the toothfish fishery really is an example of them at their best”

Despite the success of the Antarctic Treaty it does present problems because of the presence of so many countries and interests in the region and unresolved differences over sovereignty. The book discusses these current problems as well as the future problems we must grapple with as treaties and agreements are renegotiated.

This book provides an excellent resource for information on the Southern Oceans, our subarctic islands and Antarctica. It will provide students and layperson New Zealanders with an access to wide-ranging material on the history, politics, economics, ecology and natural and mineral resources of the region. References provide avenues for deeper study.

But it’s also very readable. There is an absolute minimum of technical language – and what there is often gets treated with humour. Mind you, it’s Kiwi humour so some overseas readers may miss the occasional digs against the Aussies.

Some advice for the reader, though. I read this book on an eReader and learned again that such devices are currently not always suitable for technical books, even those written in a popular style like this one. In this case only because many of the figures are colour coded. I can see a real need for colour eInk screens in eReaders – which can’t be far off anyway. And tablets such as the iPad are ideal for this book.

Fortunately this readable and informative book will help overcome that problem.

*See also:
Prime TV: The Last Ocean  Next Tuesday 8:30 pm
“The Ross Sea, Antarctica, is the most pristine stretch of ocean on Earth. But the fishing industry is targeting the lucrative Antarctic toothfish, and unless stopped, will destroy its ecosystem.”