If you are interested in the philosophy of science here’s something to look forward to. At the end of next week, October 25 – 29 a workshop – Moving Naturalism Forward – will occur in  Stockbridge, Massachusetts.

What’s more, for us so far away, the workshop will be videoed and videos will be on-line as soon as possible after the workshop finishes. They are bound to be fascinating as the questions covered will possibly include:

Here’s a list of the participants, together with field. Have a look art the list of participants for more information on affiliation, books and websites.

It’s an impressive list and  I know there are some differences – so look forward to lively debates.

It’s about time somebody sensible discussed what is meant by “naturalism” and how it relates to science.

(No. Alvin Plantinga hasn’t been invited).

I don’t know if it is physics envy or philosophy envy but scientists and philosophers do seem to snipe at each other a bit. Usually it is a philosopher criticising scientists, but often for dismissive comments about philosophy the scientist has made.

A recent example was the comment in “The Grand Design

“ by Stephen W. Hawking and Leonard Mlodinow. Here’s what they said in the first two paragraphs of the book:

“people have always asked a multitude of questions: How can we understand the world in which we find ourselves? How does the universe behave? What is the nature of reality? Where did all this come from? Did the universe need a creator? Most of us do not spend most of our time worrying about these questions, but almost all of us worry about them some of the time.
Traditionally these are questions for philosophy, but philosophy is dead. Philosophy has not kept up with modern developments in science, particularly physics. Scientists have become the bearers of the torch of discovery in our quest for knowledge.” (My emphasis here and following quotes).

Well, that caused a few negative reviews! And the highlighted text has been used as evidence for the charge of “scientism” by more than one commenter.

The philosopher Massimo Pigliucci was also critical of some scientists in his recent book “Nonsense on Stilts: How to Tell Science from Bunk

“Philosophy, by converse, is, according to some physicists (for example Steven Weinberg, in his Dreams of a Final Theory), a useless, perhaps even dangerous enterprise because it can slow scientific progress. . . . .Weinberg argues that not only is philosophy not useful to science, but in some instances it can be positively harmful.“

“Attitudes such as Weinberg’s are largely the result of intellectual arrogance. I am convinced that such arrogance hurts science, and it certainly doesn’t help bridge what C. P. Snow famously referred to as the divide between “the two cultures.”” 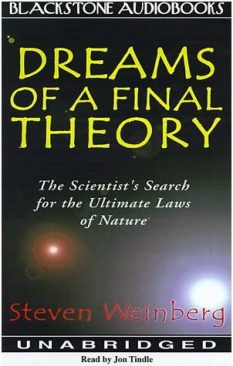 So these “conflicts” can become rather harsh!

Personally, I think Pigliuicci’s characterisation is unfair. Having just read Weinberg’s “Dreams of a Final Theory: The Scientist’s Search for the Ultimate Laws of Nature

“ I think Weinberg actually largely justifies his comments – and Pigliucci is too dismissive of them.

“The value today of philosophy to physics seems to me to be something like the value of early nation-states to their peoples. It is only a small exaggeration to say that, until the introduction of the post office, the chief service of nation-states was to protect their peoples from other nation-states. The insights of philosophers have occasionally benefited physicists, but generally in a negative fashion—by protecting them from the preconceptions of other philosophers.
I do not want to draw the lesson here that physics is best done without preconceptions. At any one moment there are so many things that might be done, so many accepted principles that might be challenged, that without some guidance from our preconceptions one could do nothing at all. It is just that philosophical principles have not generally provided us with the right preconceptions. In our hunt for the final theory, physicists are more like hounds than hawks; we have become good at sniffing around on the ground for traces of the beauty we expect in the laws of nature, but we do not seem to be able to see the path to the truth from the heights of philosophy.
Physicists do of course carry around with them a working philosophy. For most of us, it is a rough-and-ready realism, a belief in the objective reality of the ingredients of our scientific theories. But this has been learned through the experience of scientific research and rarely from the teachings of philosophers.
This is not to deny all value to philosophy, much of which has nothing to do with science. I do not even mean to deny all value to the philosophy of science, which at its best seems to me a pleasing gloss on the history and discoveries of science. But we should not expect it to provide today’s scientists with any useful guidance about how to go about their work or about what they are likely to find.
This is not merely a matter of the scientist’s intellectual laziness. It is agonizing to have to interrupt one’s work to learn a new discipline, but scientists do it when we have to. At various times I have managed to take time off from what I was doing to learn all sorts of things I needed to know, from differential topology to Microsoft DOS. It is just that a knowledge of philosophy does not seem to be of use to physicists—always with the exception that the work of some philosophers helps us to avoid the errors of other philosophers.“

I think many scientists may agree with Weinberg’s comments here -and Pigliucchi seems to actually acknowledge that with his comment “philosophy has simply never had, in recent memory anyway, much of a sway with scientists.”

More than one “philosophy”

I can really identify with Weinberg’s assertion: “The insights of philosophers have occasionally benefited physicists, but generally in a negative fashion—by protecting them from the preconceptions of other philosophers.“

I have often been told during debates that I am being “scientistic” because I have asserted that many “big” questions, such as consciousness, the nature of human morality, the origins of the universe and the question of existence of gods are scientific questions. Critics have countered with the assertion that they are philosophical questions and that scientists should keep away from them. That it is OK for cosmologists to investigate the development of the universe back to a few seconds – but they should not be investigating, hypothesising or even speculating on the actual formation of the universe. That’s a job for philosophers!

Perhaps the philosopher-scientist “conflict” is inevitable because each party comes from a different perspective. Perhaps clarifying his perspective Weinberg writes:

“It may seem to the reader (especially if the reader is a professional philosopher) that a scientist who is as out of tune with the philosophy of science as I am should tiptoe gracefully past the subject and leave it to experts. I know how philosophers feel about attempts by scientists at amateur philosophy. But I do not aim here to play the role of a philosopher, but rather that of a specimen, an unregenerate working scientist who finds no help in professional philosophy. I am not alone in this; I know of no one who has participated actively in the advance of physics in the postwar period whose research has been significantly helped by the work of philosophers.”

That has also been my experience. Yes I know critics will lament this and assert that scientists should be educated in philosophy (which philosophy?). My reply is that scientific researchers learn a working philosophy on the job. An intuitive understanding of scientific process and method which many professional philosophers seem to be ignorant of.

Pigliucci tends to dismiss Weinberg’s criticism of the role that philosophy played in resisting the move away from mechanical tradition in science, the acceptance of atomism, relativity and quantum physics.  And perhaps such influences are inevitable and may even be balanced by the positive influence of other, more radical, philosophical ideas.

The dangers of “philosophy”

But history has also seen how the political and state endorsement of philosophical position can also seriously retard scientific advance. Weinberg writes of the situation in the USSR:

“for a while dialectical materialism stood in the way of the acceptance of general relativity in the Soviet Union. As late as 1961 the distinguished Russian physicist Vladimir Fock felt compelled to defend himself from the charge that he had strayed from philosophical orthodoxy. The preface to his treatise “The Theory of Space, Time, and Gravitation” contains the remarkable statement, “The philosophical side of our views on the theory of space, time and gravitation was formed under the influence of the philosophy of dialectical materialism, in particular, under the influence of Lenin’s materialism and empirical criticism.””

I remember feeling a similar concern when I saw the obligatory prominent references to Marxist philosophers in the Chinese 1970 paper describing the first synthesis of insulin. And there are many examples of physical repression, and murder, of scientists, justified by philosophical conventions in the USSR, China and Hitler’s Germany. No wonder scientists react strongly to even a hint of philosophers wishing to dictate acceptable scientific methodology or limit areas of research or permissible conclusions.

To some extent all this might seem like old history. At least not relevant in today’s modern developed pluralist and democratic societies. But look at the USA where evolutionary science and climate science are under daily attack. Sure, scientists keep their heads down and continue their work. To them it’s like water off a duck’s back. And it’s not as if the creationists and intelligent design people are saying anything, or indeed doing anything, which is relevant to the day-to-day work of scientific researchers.

But these science deniers do have political effects. The media cover’s their arguments. School boards can subvert the scientific curriculum. State Governors exert an influence. And education boards manipulate regulation to allow suppression or distortion of accepted science and introduction of religion into science classes.

Part of this war on science is carried out in the philosophy departments of universities and conservative think tanks. The Discovery Institute clearly advances an agenda of converting modern science into a “theistic science.” Academic philosophers write text books attacking modern “scientific materialism.” And, of course, philosophers of religion get behind such anti-science trends among philosophers.

I can easily imagine the political and cultural influence of these critics of science having an effect on future research funding and on the public acceptance of scientific findings. It’s already happening with climate science.

No – I am not laying this charge against good philosophers who make the occasional snipe across the philosophy/science border. Many of these often come out against such anti-science attacks.

I just wish there were more philosophers who would.