Anti-fluoridation propagandists must think all their Christmases have come at once. They at last have a “peer-reviewed” scientific paper they can claim supports their position. What’s more, it is the second such paper to appear in the last month.

But they really are resorting to arguments of quantity (2 papers) over quality. This new paper claiming a link between community water fluoridation (CWF) and Attention-Deficit Hyperactivity Disorder (ADHD) is of just as poor quality as the earlier one claiming a link with hypothyroidism. Both papers are speculative, ignore other relevant factors, and “prove” nothing.

I discussed the hypothyroidism paper in the article Paper claiming water fluoridation linked to hypothyroidism slammed by experts. The new ADHD paper is:

Malin, A. J., & Till, C. (2015). Exposure to fluoridated water and attention deficit hyperactivity disorder prevalence among children and adolescents in the United States: an ecological association. Environmental Health, 14.

Here are my thoughts on this paper.

The authors have simply taken existing online data and searched for a statistically signficant relationship. They have explored the limited data sets used – not attempted to prove an effect. After all, correlation does not prove causation – the graph below shows an example of how correlation can often produce meaningless results. 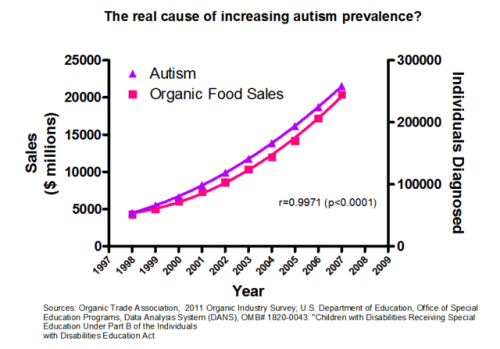 The data sets Malin and Till (2015) used are both from the USA Centers fo disease Control (CDC).

Note, they did not use data for individual children exhibiting symptoms of ADHD  determined by  a health professional. The data was from random surveys “in which parents were contacted via telephone and asked about the emotional and physical well-being of a randomly selected child from their household.” Similarly they did not use data for dietary intake of fluoride by individual children but used “the percentage of the U.S. population on public water systems that receives optimally fluoridated drinking water.”

They have assumed these data are reliable proxies for occurrence of ADHD and fluoride dietary intake. But the data could represent other factors as well.

For example, parental reporting of ADHD could differ from state to state because of differences in parental educational levels and ideological attitudes. People in  different sates may not have the same level of knowledge, awareness or acceptance of such behaviours. Malin and Till themselves acknowledge ADHD reporting is higher for parents with a high school education than for parents who did not graduate high school (Visser (2014). Parental education levels are likely to vary from state to state.

The availability of CWF can be dependent on the size of urban areas for both technical reasons and because of  recognised willingness for innovation from large and high status city leaders (Crain, 1996) so that the state prevalence used could be acting as a proxy for the distribution of urban areas of different sizes, and the relative urban/rural distributions in different sates. A correlation may indicate nothing more than a relationship between city sizes and parental education.

The authors themselves warn their study has limitations, saying it is:

“an ecological design that broadly categorized fluoride exposure as exposed versus non-exposed rather than collecting information related to concentration of fluoride and patterns and frequency of exposure or outcome at the individual level. Future research could explore the relationship between exposure to fluoridated water and the occurrence of ADHD at the individual level.”

And, again, we should always keep in mind that correlation does not prove causation.

Inevitably any serious exploratory investigation should start with a working hypothesis. As psychologists the authors are presumably interested in ADHD and its causes. But why investigate state prevalence of CWF instead of any of the other factors indicated in this condition. In fact they list a range of candidates from arsenic and lead to food additives and food colouring. Granted, they saw CWF as a field ripe for plucking as they say fluoride “has received virtually no attention in the ADHD literature.” But I would have expected them to at least include these other known factors as confounders in their study.

I think the answer lies with their biased reading of the literature. They start with the claim that fluoride is a “widespread environmental neurotoxin,”  but only really cite Grandjean and Landrigan (2014) and the closely-related meta-analysis of Choi et al., (2012) to support this claim. I have discussed those papers and their problems in  Quality and selection counts in fluoride research, Repeating bad science on fluoride and Controversial IQ study hammered in The Lancet. A major problem with that work is it involved areas of endemic fluorosis where fluoride intake is high so it is not directly relevant to CW. In fact, the authors’ bias is indicated by the fact they did not cite Broadbent et al., (2014) which showed no neurotoxic effects of CWF. Broadbent et al.’s paper is directly relevant to CWF – Choi et al.’s is not. (I discussed the differences as indicated by dental fluorosis data in my article Water fluoridation and dental fluorosis – debunking some myths.

I feel this omission indicates that the authors resort to the special pleading of anti-fluoride activists in the citations they used for justifying their starting hypothesis. The also rely on studies of rats fed very high levels of fluoride, such as that of  Mullenix et al., (1995), and then use her weak argument to claim relevance to CWF by comparing  rat blood plasma F levels to those for humans ingesting high levels of fluoride. (See my article Peer review of an anti-fluoride “peer review” for a discussion on this). Similarly, although acknowledging the high F intake levels of most of the studies reviewed by Choi et al., (2012), they excuse this by referring to the one study with low levels (0.88 mg/L) – ignoring the fact this was a one and a half page article in a newsletter describing measurements in an iodine deficient area. In this study (Lin, et al., 1991) children from low iodine areas were compared with a group from another area that had received iodine supplementation. About 15% of the children suffered mental retardation, 69% of these exhibited subclinical endemic cretinism. The effect of iodine supplementation was clear, the effect of fluoride not so clear. (See Peer review of an anti-fluoride “peer review” for further discussion of this).

So, I think the justification for their starting hypothesis is hardly objective

Despite  problems with justification for their hypothesis they did find a significant positive relationship between the US state prevalence of parent-reported ADHD in children and the state proportion of water supplies with optimum levels of fluoride. Again, not a proof of their hypothesis, but interesting data to consider nonetheless. They found inclusion of socio-economic status data improved the relationship but did not consider other relevant confounding factors like parental education and exposure to relevant chemicals.

In contrast, the relationship they found between ADHD prevalence and natural fluoride prevalence (at optimum level or above) was negative and statistically signficant. This actually conflicts with their starting hypothesis of chemical neurotoxicity based on the work of Choi et al., (2014) and Grandjean and Landrigen (2014). While they concede the data really doesn’t allow a conclusion they suggest it could result from the ADHD effect being specific to “fluoridation chemicals” and not fluoride itself.

This leads them to suggest a theoretical “pathway” for CWF contributing to ADHD – the corrosion of lead-bearing plumbing by fluorosilicic acid. Trouble is this ignores the well established fact that fluorosilicates used in CWF decompose to form silica and the hydrated fluoride anion when diluted in water. Malin and Till seem oblivious to work showing this and rely instead on citation of the poor quality work of Masters and Coplan to support this “pathway.” Another example of their citation bias.

But their proposal does raise an important question. Given that lead is one suggested cause of ADHD why did they not concentrate their exploratory analysis of data for lead intake by children in different states, rather than CWF prevalence? Or at least include lead levels as confounders in their statistical analysis.

Their second suggested “pathway” is via suppression of thyroid gland activity by fluoride. But, again, this hypothesis does raise the question of other causes, in particular iodine deficiency. (See my discussion of Peckham’s paper – Paper claiming water fluoridation linked to hypothyroidism slammed by experts – for more on this). If this was part of their starting hypothesis then why not consider data for state prevalence of iodine deficient diets of children? Or or include this as a confounder in the analysis?

I find it interesting that despite declaring a starting hypothesis based on the chemical toxicity claims of Choi et al., (2012) and Grandjean and Landrigen (2014), Malin and Till have not proposed any theoretical “pathway” involving direct neurotoxicity of fluoride itself to explain their result. This makes their unwillingness to consider other relevant confounding factors even more obvious.

As I wrote above correlation is not causation  and this study does not “prove” anything. The observed “link”could represent a number of other relationships which are not directly associated with CWF. The analysis also suffers from a lack of consideration of obvious confounding factors.

I believe this is the sort of problem that arises when researchers have a committment to a starting hypothesis and peer review systems are inadequate. Such studies are a problems when published because ideologically motivated activists love to cherry-pick them to claim “scientific support” for their cause. This is not helped when the researchers themselves climb on the activist bandwagon and attempt to claim more for their findings that is really justified.

I think Malin and Till have done this with the press release from their department – Fluoride in tap water associated with ADHD in children, researchers find. It is one thing to say:

“Our findings showed that artificial fluoridation prevalence in 1992 predicted ADHD prevalence in 2003, 2007 and 2011 among children and adolescents in the United States, and that was after controlling for median household income.”

But the careful claim their “findings showed” a “prediction” is far too easily seen as proof in the mind of the lay-reader. Worse, they draw unwarranted conclusions from their limited work:

“As citizens of Toronto, living in an artificially fluoridated community, I think we need to ask ourselves whether this is still a worthwhile practice.”

One can only pose such questions in the context of an objective assessment of their own work together with other research of possible harmful and beneficial effects of CWF. I think their biased choice of citations in this paper shows they are not capable of doing this.

On the other hand reviews such as the recent NZ Fluoridation Review, Health effects of water fluoridation : A review of the scientific evidence, have done this. Community leaders should be going to such sources for their information and not rely on cherry-picked poor quality studies like Malin and Till (2015) which will be promoted to them by anti-fluoride propagandists and activists.